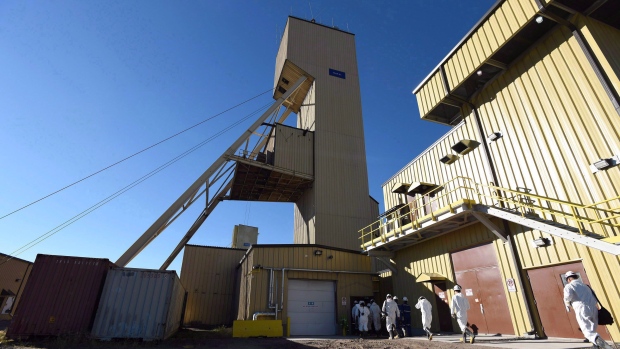 Media enter the head frame during a Cameco media tour of the uranium mine in Cigar Lake, Sask., Wednesday, September 23, 2015. , The Canadian Press

SASKATOON -- Shares of uranium producer Cameco Corp. closed down nearly eight per cent Monday after the company received much less than it was seeking in an arbitration dispute.

The downward pressure on the stock price, after what the company called a disappointing amount of damages, came despite a positive decision Friday night from U.S. President Donald Trump to not impose import restrictions on uranium.

Cameco says a tribunal of international arbitrators ruled that Japanese utility Tokyo Electric Power Co. did not have the right to leave a supply agreement and awarded Cameco US$40.3 million, far less than the US$700 million in damages that it was seeking.

"We are pleased that the Tribunal agreed that TEPCO was not entitled to terminate the supply agreement, but we are disappointed with the amount of damages awarded," said CEO Tim Gitzel in a statement.

TEPCO said in 2017 that it would terminate a long-term contract because of measures the Japanese government took after the 2011 Fukushima Daiichi nuclear disaster.

News of the ruling, which can't be appealed, overshadowed the positive decision from the U.S. to not impose import restrictions on uranium over national security concerns.

The Saskatoon-based company, which sells about 25 per cent of its production to the U.S., says it was pleased by the U.S. decision and sees value in strengthening energy security on a North American basis.

Gitzel said in a statement that he welcomed a recent commitment by Trump and Prime Minister Justin Trudeau to develop a joint action plan on critical minerals.

"With operations on both sides of the border, Cameco also sees tremendous value in increasing co-operation between the United States and Canada to address critical mineral issues and strengthen security of supply on a North American, rather than strictly national, basis."