Canada recorded one of its best months of job gains on record in August, a surprising show of strength by a labour market that has relentlessly powered the nation’s expansion.

The economy added 81,100 jobs last month, Statistics Canada said Friday in Ottawa, versus expectations for a gain of about 20,000. It’s the seventh largest monthly gain in records going back to 1976. Canada has now added 471,300 jobs over the past 12 months, the most in a year since 2003.

Friday’s jobs report will only reaffirm expectations at the Bank of Canada that the nation’s economy has developed a certain amount of resilience to global trade headwinds, giving the central bank ammunition to buck the global easing trend. For one, the gain in August should ease worries about the extent of any slowdown in the second half of this year.

“If the Bank of Canada was on the fence about cutting rates in October, today’s jobs numbers might be one further push towards standing pat,” Avery Shenfeld, chief economist at CIBC World Markets, said in a note to investors.

The Canadian dollar jumped 0.3 per cent to $1.31897 per U.S. dollar at 8:39 a.m. in Toronto. The currency has gained almost a full cent since Wednesday, when the Bank of Canada began to downplay the likelihood it is poised to cut interest rates soon.

Swaps trading suggests markets have pushed back expectations for the next rate cut to as late as April, from the December cut expected earlier this week. 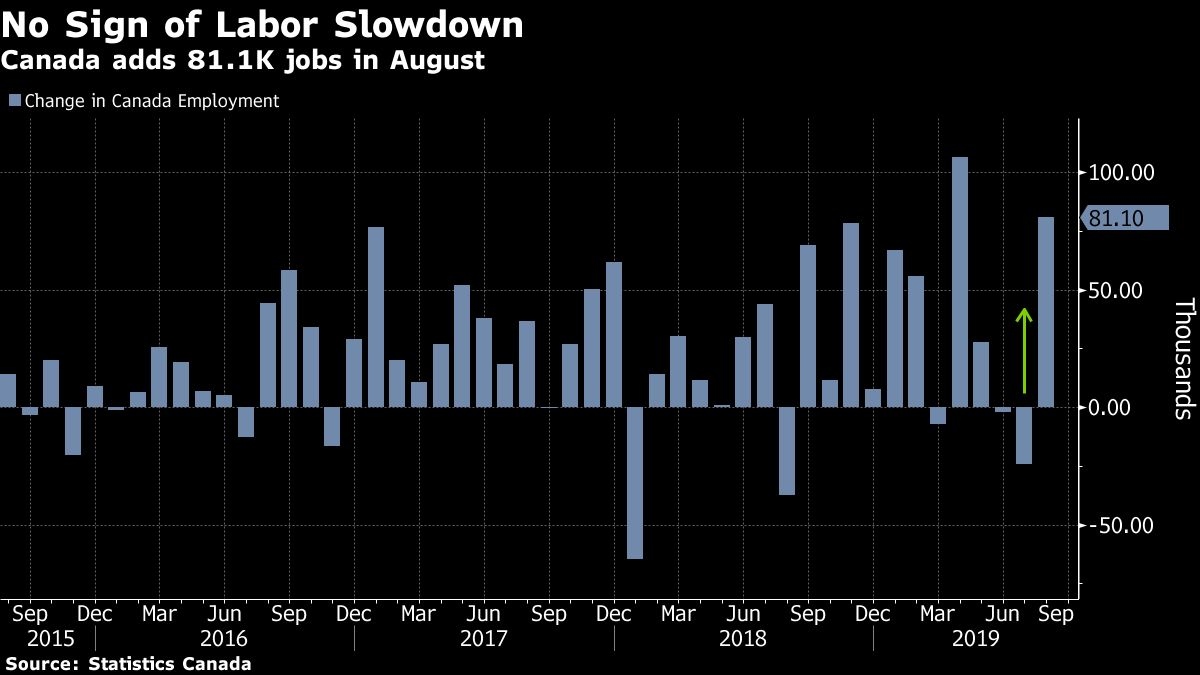 The strong jobs market is being fed by new workers. That’s a good sign, suggesting there is a reserve of available workers that employers can tap. That should help temper any overheating risks and raise confidence the jobs rally has more room to run.

As a result, the unemployment rate was unchanged at 5.7 per cent in August, as much of the employment gain reflected a surge in new entrants to the labour force.