Employment rose by 289,600 in May, Statistics Canada said Friday in Ottawa, surprising economists who had been anticipating more losses last month. The gains were across most industries and provinces, though largely driven by higher employment in Quebec, the province hardest hit by the pandemic.

The numbers echo recent high-frequency data, which had signaled a recovery is underway, with job postings increasing and more Canadians reporting an increase in work at the end of May. They will be a relief to policy makers who had been scrambling to inject hundreds of billions in cash into the economy to keep it afloat. Still, just under 5 million remain without work or substantially reduced hours with the jobless rate at postwar records.

“The surprisingly positive readings on employment paint a more optimistic picture of the early part of the recovery, but there’s still a long road back,” Royce Mendes, an economist at Canadian Imperial Bank of Commerce, said in a research report. “The increase in May only represents 10 per cent of the COVID-19-related job losses and absences that occurred over the prior two months.”

The pick up in May follows an unprecedented loss of about 3 million jobs in March and April. More than 2 million employed Canadians continue to experience much lower hours worked than pre-crsisis.

Canada’s currency extended gains on the result, appreciating 0.7 per cent to $1.3406 against its U.S. counterpart at 9:46 a.m. Toronto time. Yields on two-year government bonds rose 2 basis points to 0.35 per cent.

The better-than-expected report suggests the governments programs to cushion the blow to the labor market are working. By mid-May, 179,000 businesses had applied for the government’s 75 per cent wage subsidy program. The pace of applications to Canada’s emergency income benefit program has also decelerated in recent weeks, suggesting the worst of the layoffs and job losses is over.

In addition to the employment pick up, Statistics Canada said the number of people who worked less than half their usual hours dropped by 292,000. That means the number of Canadians who have either lost their job or worked substantially fewer hours has fallen to just under 5 million, from about 5.5 million in April. Hours worked rose 6.3 per cent in May from the prior month but were still 23 per cent below February’s levels .

The surprise jump reflects the cautious reopening of the economy across provinces. By the time the employment survey was taken from May 10 to May 16, some provinces including B.C., Saskatchewan and Quebec allowed some non-essential businesses to reopen.

Quebec accounted for nearly 80% of May’s gains, the statistics agency said. In contrast, Ontario -– where the economy remained largely shut until May 19 –- saw more losses. 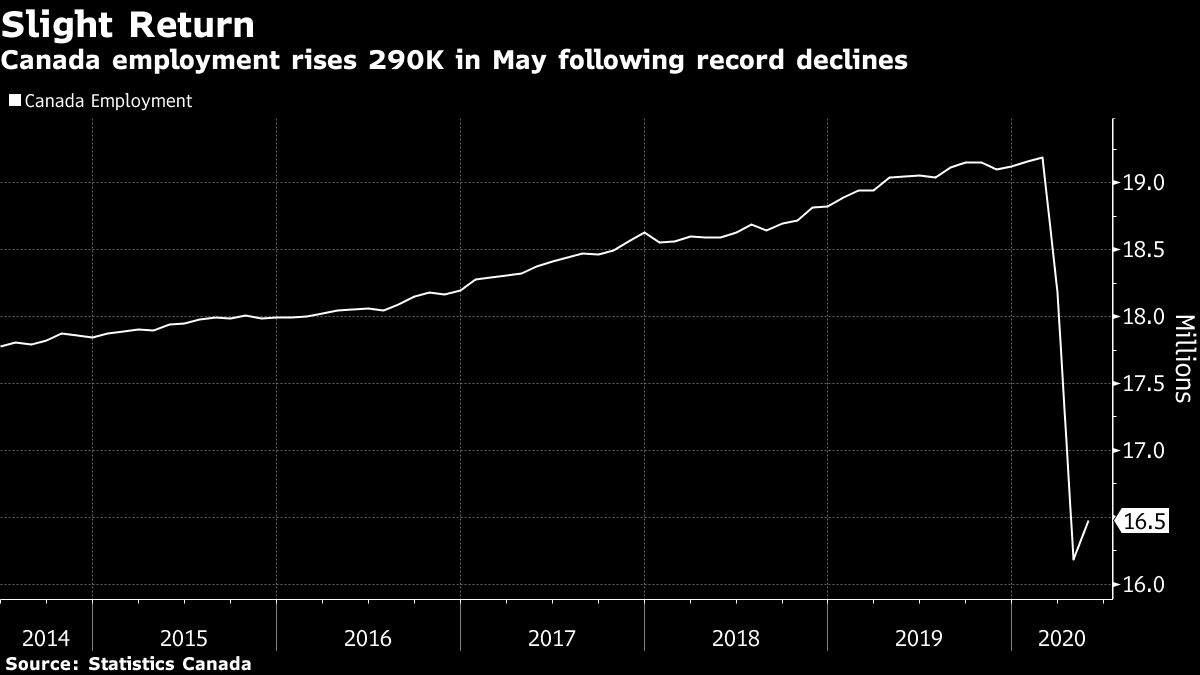 Demographically, male employment increased more than twice as fast as that for women, consistent with the more rapid increase in the goods-producing industry. Women were among the earliest victims of the Covid-19 related job losses in March and the latest data suggest they are slower to recover as well.

“The kinds of jobs that reopened earlier tend to be more male dominated in employment and also that more women don’t know how to get back to work because they don’t know what to do with their kids because schools aren’t open,” said Armine Yalnizyan, a research fellow at the Atkinson Foundation.

Women with at least one child under age 6 showed a slower return to work than women with older children. Statistics Canada said it will continue to monitor labor market outcomes for men and women with children in the months to come.

Youth are still suffering heavily from the Covid-19 economic shutdown. While employment recovered by 30,000 for those aged 15-24, the cumulative job losses for this age cohort are still a whopping 843,000 from February to May.