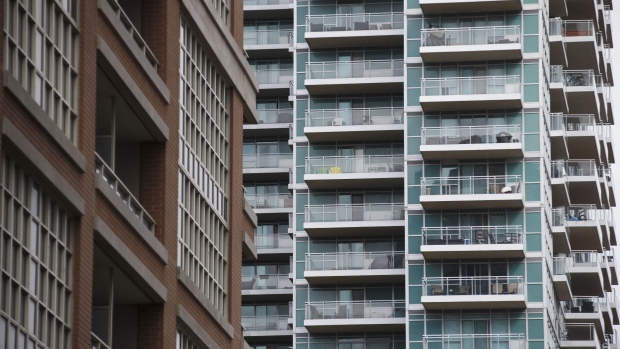 Builders started work on an annualized 222,013 units, a drop of 9.6 per cent from the prior month, Canada Mortgage and Housing Corp. reported Friday. That still beat the median forecast of 202,000 units in a Bloomberg survey. Multiple unit starts fell 12 per cent, the agency said, while construction of single-detached houses was down 1.6 per cent.

The “national trend” in housing starts increased in July, in spite of the decrease in the adjusted level, said Bob Dugan, CMHC’s chief economist. “High levels of activity in apartment and row starts in urban centers in recent months continued to be reflected in the high level of the total starts trend in July,” he said in a statement.

The July numbers were “less of a reversal than we thought” after the surge in June, Doug Porter, chief economist at Bank of Montreal. The average of 208,000 so far this year represents elevated demographic demand.

“Residential construction activity remains rock solid in Canada and, combined with firming resale activity, will be something for the Bank of Canada to keep in mind,” Porter said.

Canada’s real estate market is stabilizing after steep declines in 2018 that lingered into the first quarter. That’s been helped by stronger economic growth and declining borrowing costs. Home sales in Toronto and Vancouver each jumped 24 per cent last month, and prices in many major cities are seeing steady increases. The improvement is seeping into consumer confidence, which has climbed to the highest in more than a year partly on expectations for further home price increases.