Ontario is gradually reducing its exposure to the legal pot industry. An email obtained by BNN Bloomberg shows the province plans to allow the private sector to handle distributing cannabis from producers to retailers. The email, which was sent to Canadian licensed producers late Tuesday, shows that Ontario plans to soon adopt a new measure to allow for a “third-party centralized distribution” system. The changes follow feedback the Ontario Cannabis Store solicited from the industry last month to determine whether it should get out of its wholesale cannabis business. The email also stated that the OCS is seeking further consultation with industry participants interested in services where cannabis can be shipped directly from a cannabis producer to a retailer, sidestepping a wholesale operator entirely.

The U.S. House of Representatives’ Judiciary Committee approved legislation on Wednesday to decriminalize marijuana and reassess pot convictions at the federal level. The Marijuana Opportunity Reinvestment and Expungement Act was approved by the committee 24-10 Wednesday, and is now set for a wider vote in the House. However, while the bill’s passage marks a significant step in legalizing and fully liberalize cannabis in the U.S., it’s unlikely to find enough votes to pass in the Republican-controlled Senate. Currently, 33 states and the District of Columbia have legalized cannabis for medical or recreational use.

Vancouver-based cannabis extraction company Nextleaf Solutions said it has been granted its sixth U.S. patent on Wednesday for its proprietary way to chill cannabinoids during the extraction process. Nextleaf also said Colombia issued a patent for the company’s industrial-scale process of extraction, refinement, and distillation of cannabinoids. The company now has 10 patents across Canada, Australia, Colombia, and the United States. Patents and intellectual property are emerging as a key battleground in the nascent days of the cannabis industry. Companies are increasingly employing new technologies and methods in order to gain an advantage on their peers.

U.S. multi-state operator Harvest Health & Recreation reported a 25 per cent sequential quarterly increase in revenue to US$33.2 million in its third quarter, the company announced Wednesday. However, the company also said it lost US$39.1 million in the quarter, citing “growth initiatives, disclosed acquisitions and planned expansion.” Adjusted EBITDA came in at a $10.9 million loss. Compass Point analyst Rommel Dionisio said that while the company beat expectations on its top line metrics, it widely missed forecasts on its bottom line. Still, Dionisio said that given Harvest’s focus on building new cannabis stores in lucrative U.S. states, the company remains “on track to become one of the largest and best positioned of the U.S. multi-state operators (MSOs) by next year.” Harvest separately announced it revised the terms of its remaining acquisition of CannaPharmacy, an east coast U.S. cannabis operator.

2.3%
-- The decline in Canadian recreational cannabis prices between January and October, according to inflation figures released on Wednesday by Statistics Canada. 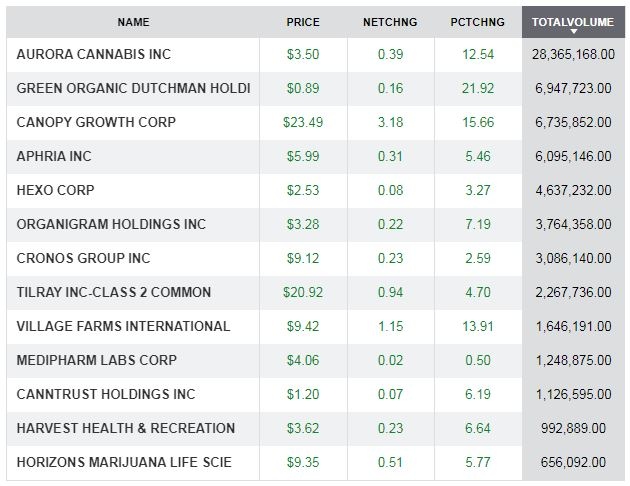