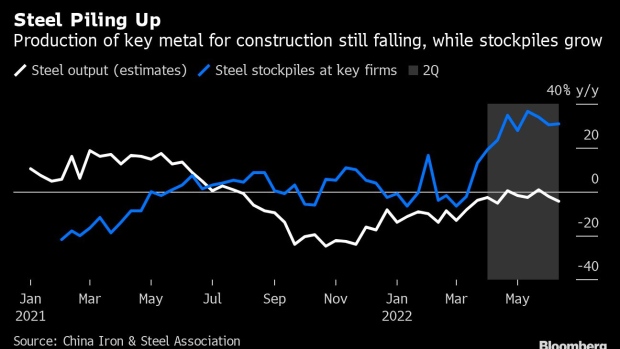 Shoppers at Taikoo Li Village Mall at Sanlituan in Beijing, China, on Monday, May 30, 2022. China reported the fewest new Covid-19 cases in almost three months, with the easing of outbreaks in Beijing emboldening authorities to relax some of the strictest virus controls of the pandemic and move to stimulate the country’s faltering economy. Bloomberg , Bloomberg

(Bloomberg) -- Signs are mounting that China’s economy shrank in the second quarter for the first time since 2020, placing the nation’s official statistics under fresh scrutiny as analysts bet the government will avoid acknowledging that slump.

The consensus forecast from economists in a Bloomberg survey is that the government will next week report gross domestic product grew about 1.5% in the second quarter from a year earlier. Yet high-frequency data for June and losses in the previous two months suggest the economy contracted over that period due to the lingering effects of lockdowns in dozens of cities.

A quarterly drop in GDP, which has only happened once before, underlines China’s slower rebound from coronavirus curbs than in 2020, providing less of a boost to a struggling global economy. Debate about the accuracy of official data will likely persist this year as President Xi Jinping urges officials to strive to meet an ambitious target for annual GDP growth of about 5.5%, while at the same time sticking with a Covid Zero policy that requires tough restrictions wherever virus cases emerge.

“There is no plausible story that GDP growth should be positive in the second quarter,” said Logan Wright, head of China markets research at Rhodium Group. “The downturn in household consumption is very significant within both the official retail sales data and other proxies. And the property sector remains a significant drag.”

The evidence from alternative indicators is overwhelming of an ongoing slump in the economy. Travel data shows passenger trips taken on China’s roads were mostly below last year’s levels into July, according to transport figures analyzed by TS Lombard. The number of domestic flights in the quarter was down 62% from the same period last year, according to data provider Variflight.

The movement of trucks carrying goods between cities, which researchers say are closely correlated with GDP, show weak activity. In the last week of June there were still about 20% fewer trucks on the nations roads compared to a year earlier, according to data from G7 Connect, a digital logistics firm.

In the property market, which accounts for about 20% of GDP, home sales remained in a deep slump in the second quarter, according to data from China Real Estate Information Corp. The figures show the market hit a bottom in May and stopped getting worse, but is nowhere near actual growth.

Car purchases, which make up about 10% of monthly retail sales, fell more than 10% in the quarter, according to Bloomberg calculations based on data from the China Association of Automobile Manufacturers.

Other independent estimates show an even worse picture than the high-frequency data. Bain & Co. predicts luxury sales in China fell 30%-50% in the second quarter from a year earlier. Nike Inc. reported a 20% fall in revenue from China in the three months ended in May and said it was “cautious” on the country’s recovery.

Despite those signs, Beijing would be reluctant to report a contraction in the economy. In May, Premier Li Keqiang said officials should work to ensure the economy expands over the quarter.

“Beijing will never announce a second-quarter contraction, Li Keqiang made that very clear,” Leland Miller, chief executive officer at China Beige Book, which polls Chinese companies on activity levels, told Bloomberg TV. “We think that they are going to throw a number in the 2% range out. Its not justified by the data.”

Reporting positive growth in the quarter would go some way to helping China reach its annual growth target, although it remains a tall order. Wang Yiming, an adviser to China’s central bank, said last month that if growth was 1% in the quarter, the economy would need 7.5% expansion in the second half to meet the target, adding that would be “difficult” to achieve.

The bullish story for growth in the second quarter rests largely on industrial production for export and a pick-up in infrastructure investment.

“While consumption and property have been dragging on growth, we have seen more of a meaningful recovery on the production side,” said Jing Liu, chief economist for Greater China at HSBC Holdings Plc, who is forecasting 1% growth for the quarter. “This is partly on the back of prioritizing resumption of work in key manufacturing sectors even amidst the recent Covid-19 outbreak.”

While official data on industrial production turned positive in May, that was largely due to a rebound in the mining sector, especially in coal production. High-frequency indicators for June show production of steel, a key industrial good, fell year-on-year in the first 20 days of the month, according to data from the China Iron & Steel Association. Meanwhile, inventories are at historically high levels, indicating weak construction demand.

Weaker growth would put pressure on policy makers to deliver more stimulus in the second half of the year, with attention focused on a July meeting of the Politburo, the Communist Party’s top decision-makers. Economists linked to the government have suggested the possible sale of special central government bonds, and the advanced issuance of next year’s bond quota for local governments in order to fund infrastructure spending.

Some economists openly admit uncertainty about what Beijing will announce. Larry Hu, China economist at Macquarie Group, said his estimate of 1.5% growth in the second quarter is “more guess than estimate.”

“I would not be surprised to see that the year-on-year growth in the second quarter falls to zero or even negative,” he said. “I think policy makers are waiting for the result as well, before they decide how much additional stimulus they have to do in the second half.”