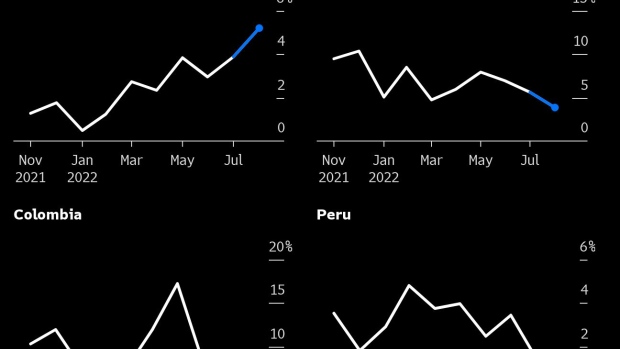 Official figures on Tuesday are expected to show a mixed picture for the economy in the third quarter. Gross domestic product probably expanded 3.4% from a year earlier, according to economists surveyed by Bloomberg, up from near-stagnant growth in the second quarter, when major cities like Shanghai were in lockdown.

September data for retail-sales growth will likely show a slowdown to 3.5% year-on-year as Covid restrictions kept many people at home. Industrial production probably stabilized, though, as higher spending on infrastructure drove up demand for materials such as steel.

Investors are watching closely how growth concerns are addressed as Communist Party officials meet in the next few days to select new leaders at their twice-a-decade congress. President Xi Jinping kicked off the event on Sunday, reiterating that economic development is his party’s “top priority.”

Economists predict China’s growth will slow to just 3.3% this year, much weaker than the official goal of around 5.5%. That would be the biggest miss since the government began setting GDP targets in the early 1990s. Beijing has downplayed the importance of this year’s target, vowing instead to achieve the “best outcome” possible.

A stronger rebound will depend on how soon China eases its zero-tolerance approach to Covid-19. The International Monetary Fund’s top official in China said on Friday that conditions for lifting Covid rules will probably be in place only in the second half of next year.

The People’s Bank of China has taken a measured approach to monetary easing, cutting its key interest rates twice this year and guiding banks to lower lending rates to spur borrowing. On Monday, officials are expected to maintain the rate on one-year policy loans, called the medium-term lending facility, at 2.75% and keep liquidity neutral.

Room for more aggressive easing is limited by the US Federal Reserve’s hawkish stance, with the yuan already having dropped to its weakest levels since 2008 as foreigners sell local assets.

“China’s 3Q GDP will likely show only a feeble recovery after growth stalled the prior quarter. Covid Zero, the property slump and power outages likely held back the rebound. Activity data for September should show signs of production stabilizing, while investment ticks up with help from government stimulus.”

Elsewhere, a likely further acceleration in UK inflation, housing data in the US and a large Turkish rate cut may be among the biggest economic events of the week.

Elsewhere in the region, Reserve Bank of Australia Deputy Governor Michele Bullock will share the bank’s latest views in a speech on Tuesday following the RBA’s recent pivot to smaller rate hikes, while New Zealand inflation figures the same day will show if the central bank’s aggressive rate hikes are starting to rein in prices there.

Japan’s latest inflation figures on Friday are expected to show price growth hitting 3% for the first time since 1991, with the exception of tax-hike years. That will increase scrutiny on the need for the Bank of Japan to continue with rock-bottom interest rates that have pushed the yen to its weakest in 24 years and forced the government to intervene in markets. BOJ board member Seiji Adachi will share his thoughts on policy on Wednesday.

In the wake of hotter US inflation numbers, the economic calendar shifts to housing data, including the National Association of Realtors’ figures Thursday on September sales of previously-owned homes.

Mortgage rates are at two-decade highs, sidelining many potential buyers as the Fed employs aggressive tightening to beat back the worst inflation in a generation.

Government data on Wednesday is forecast to show a slump in September new home construction as builders dial back production in response to waning demand and higher borrowing costs.

Other data include industrial production, a pair of Fed bank surveys of regional manufacturing activity, and weekly jobless claims. The Fed will also issue its Beige Book of economic conditions around the country. Central bank speakers on the agenda include regional Fed presidents Neel Kashkari, Charles Evans and James Bullard.

Jeremy Hunt will begin his first full week as UK Chancellor of the Exchequer after the dramatic exit of his predecessor, Kwasi Kwarteng, after only 38 days. Prime Minister Liz Truss has scrapped a corporate-tax cut that was part of a radical fiscal package that roiled financial markets.

Data will also draw their attention. On Wednesday, inflation is predicted to have accelerated in September to double digits, part of a cost-of-living squeeze that’s likely to intensify as higher mortgage rates feed through. Meanwhile, on Friday, retail sales will probably have dropped.

In the euro zone, consumer confidence the same day will be one of the highlights. It already hit an all-time low last month and is predicted to drop further, shadowed by high energy costs and the war in Ukraine.

Clues on what the European Central Bank might do at its rate meeting later this month may emerge as the pre-decision window closes for policy makers to speak in public. Vice President Luis de Guindos and Chief Economist Philip Lane will be among those scheduled for appearances.

The Turkish central bank will likely deliver another 100 basis-point cut on Thursday, further cementing its outlier status among global central banks. President Recep Tayyip Erdogan has called for single-digit rates by the end of this year despite annual inflation hurtling above 80%.

In Nigeria, data on Monday will likely show inflation quickened in September to more than double the 9% ceiling of the central bank’s target band for a fourth month.

By contrast, price growth in South Africa may have eased for a second successive month in September as gasoline costs declined. It’s still expected to stay above the central bank’s 6% ceiling and will likely prompt the Monetary Policy Committee to increase borrowing costs for a sixth successive meeting in November.

The Brazilian central bank’s Focus survey of market expectations gets the week rolling, followed by GDP-proxy data. Extraordinary cash subsidies to low-income households and other measures ahead of Brazil’s presidential elections have analysts marking up their growth forecasts for Latin America’s biggest economy.

From Peru, unemployment figures for the capital, Lima, should show that the megacity’s labor market still isn’t back to pre-pandemic form, while August GDP-proxy data is expected to show the economy slowing dramatically.

Colombia’s output report posted Tuesday will likely confirm that the economy is powering through the fastest inflation in over two decades. Data out Wednesday should show that the Andean nation posted a 56th straight trade deficit in August.

After a solid second quarter and better-than-expected July readings, Argentina’s August output figures due Thursday will likely reflect the drag from a number of gathering headwinds.

Budget data should point to the challenges facing new Economy Minister Sergio Massa, given that the government’s agreed to run a primary deficit of 2.5% of GDP in 2022 and 1.9% next year.