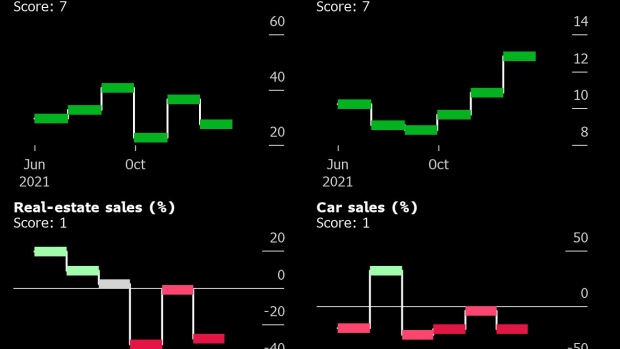 (Bloomberg) -- China’s economy continued to slow in November with car and homes sales dropping again as the housing market crisis dragged on.

That’s the outlook from Bloomberg’s aggregate index of eight early indicators for this month. While the overall number stayed unchanged, under the surface there was a further deterioration in some of the real-time economic data.

Strong export demand has helped to partly offset the property slump, and the latest shipment figures from South Korea -- a bellwether for global trade -- suggest another solid month for the sector. However, the pace of increase slowed and other high-frequency global trade data also suggest an easing in demand.

New export orders for smaller manufacturers in China jumped in the month, according to a survey of more than 500 firms by Standard Chartered Plc. Export-focused companies in the survey also said they expect faster sales, output, and new orders in the next three months.

Domestic demand was “subdued” though, according to the survey, with the index for overall conditions improving slightly while the gauge for production remained unchanged.

“Services sector business activity has improved, while the performance of the manufacturing sector has softened further,” Standard Chartered’s economists, Hunter Chan and Shuang Ding, wrote in a report accompanying the survey.

“The current performance sub-index for manufacturing SMEs dropped further to a nine-month low as production and new orders growth eased, despite a strong recovery in new export orders,” they said.

Stockpiles of iron rebar were at their lowest since mid-January this year as construction and steel output continues to slow. While low stockpiles are usually a good sign for the economy as it indicates strong construction demand, the nation’s property turmoil in recent weeks has curbed construction activity and roiled metals markets.

The central government this week again called on local governments to sell bonds faster and use the money to boost infrastructure investment as a way to support growth. Iron ore prices have risen in recent days on expectations of a rebound in steel demand and output in the rest of the year, but local governments have struggled to find good projects to spend their money on this year.

So far the central bank and governments are keeping a tight rein on any large-scale stimulus or extra spending.

Factory-gate inflation showed no signs of easing this month, with a set of data tracked by Bloomberg Economics surging to the highest level on record, despite government efforts to control surging coal prices.

The official producer price index in October rose at the fastest pace since July 1995, and while that boosts the profits of energy producers and some other firms, it cuts into the margins of other companies and also led to power shortages earlier in the year.