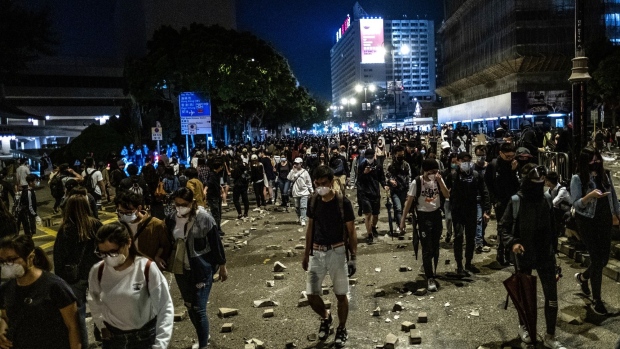 Demonstrators walk towards the Hong Kong Polytechnic University during a protest in the Tsim Sha Tsui district of Hong Kong, China, on Monday, Nov. 18, 2019. , Bloomberg

OTTAWA -- The Chinese ambassador to Canada warned the Trudeau government on Thursday not to grant asylum to Hong Kong residents fleeing a widely criticized national-security law imposed by Beijing.

"We strongly urge the Canadian side not (to) grant so-called political asylum to those violent criminals in Hong Kong," Ambassador Cong Peiwu said Thursday in a video press conference from the Chinese Embassy in Ottawa.

He said that amounted to "interference in China's domestic affairs, and certainly, it will embolden those violent criminals."

Hong Kong was supposed to operate under a "one country, two systems" deal after Britain handed its former colony over to Beijing in 1997 under an international agreement. But human-rights and pro-democracy advocates say Beijing's new national security law is undermining freedom in what is known as the Hong Kong Special Administrative Region.

Cong also flatly rejected Prime Minister Justin Trudeau's assertion that China is engaging in coercive diplomacy by imprisoning two Canadian men in retaliation for the arrest of a Chinese high-tech executive on an American extradition warrant. Meng Wanzhou is living under house arrest in Vancouver while her case wends through a British Columbia court.

In December 2018, China imprisoned Michael Kovrig and Michael Spavor and charged them with undermining the country's national security. Cong said they are still undergoing a legal process in China, but he did not provide further details.

"We will remain absolutely committed to working with our allies to ensure that China's approach of coercive diplomacy, its arbitrary detention of two Canadian citizens, alongside other citizens of other countries around the world, is not viewed as a successful tactic by them," Trudeau said earlier this week as the two countries marked 50 years of relations at one of the lowest times in bilateral relations.

Cong said Canada's efforts to get other countries to join its fight for Kovrig and Spavor is "doomed to fail."

The European Union raised concerns about the two, by name, in the communique summarizing its recent summit with China.

"We oppose any remarks that interfere in our internal affairs. And I would like to point out, there is no coercive diplomacy on the Chinese side," Cong said.