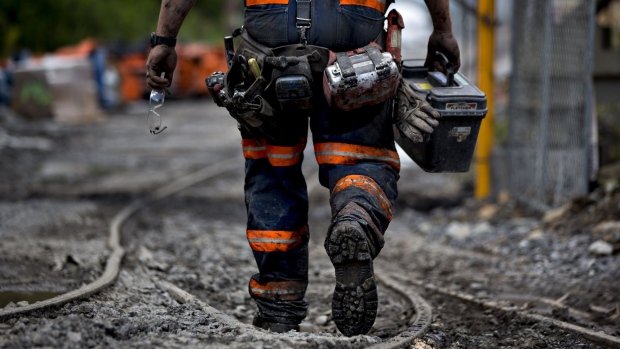 A miner walks next to mantrip shuttle tracks after exiting the newly opened Ramaco Resources Inc. Stonecoal Alma mine near Wylo, West Virginia, U.S., on Tuesday, Aug. 8, 2017. From 2008 to 2016 production from West Virginia’s southern coalfields fell from 117 million tons to 36.6 million, now, the trend is reversing. With prices tripling over the last year for metallurgical coal, which is used in steel-making and hard to find elsewhere in North America, through mid-April of this year, coal output rose 9 percent in southern West Virginia compared with a year ago, according to the U.S. Energy Information Administration. Photographer: Andrew Harrer/Bloomberg , Bloomberg

Earnings for North American coal miners may plunge by more than half this year as the coronavirus pandemic makes a weak market even worse, according to Moody’s Investors Service.

“Coal consumption will be crushed in 2020,” analysts led by Benjamin Nelson wrote in a report Sunday. “We expect a sharp and sustained slowdown in economic activity will result in lower economic growth, reduced demand for electricity and reduced demand for steel.”

Earnings before interest, taxes, depreciation and amortization will slide by more than 50 per cent in 2020, with thermal coal production down more than 25 per cent, according to the report.

The ratings company has had a negative outlook on the industry since August.

Already facing an inexorable decline as utilities shift away from the dirtiest fossil fuel, Moody’s said the struggling coal industry won’t be able to count on help from Washington “as the U.S. government directs financing toward industries more likely to rebound as the crisis eases.”

While some analysts including the U.S. Energy Information Administration have predicted a rebound in coal demand next year driven by rising natural gas prices, Moody’s is expecting a different scenario.

“We expect prices for natural gas, perhaps coal’s biggest competitor in North American power generation, to remain low through the early 2020s,” according to the report. “Persistently low natural gas prices will undercut the EIA’s expectations.”