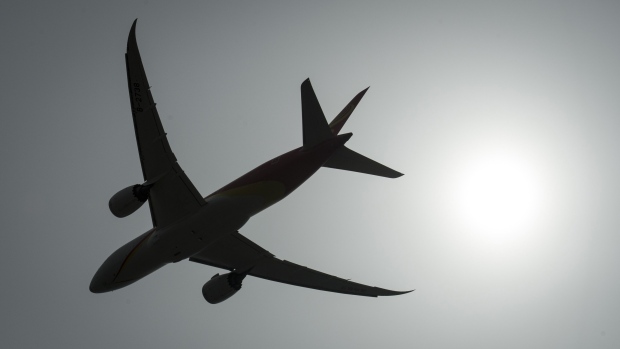 A plane is silhouetted as it takes off from Vancouver International Airport in Richmond, B.C., May 13, 2019. The federal Competition Tribunal has come down in favour of the Vancouver Airport Authority on a case revolving around airplane food. The Canadian Press/Jonathan Hayward

OTTAWA — The federal Competition Tribunal has come down in favour of the Vancouver Airport Authority in a case involving catering companies that provide airplane food.

The quasi-judicial body on Thursday dismissed a claim by the Competition Bureau that argued the airport operator effectively dampened competition among in-flight caterers.

In a case launched in 2016, the competition commissioner had argued the airport authority exploited its market position by denying new airplane caterers access to the airport, resulting in higher prices and poorer service.

The tribunal said in its decision that the "overall character" or "overriding purpose" of the airport authority's actions were not anti-competitive.

"The tribunal also concluded that the commissioner has not established that VAA's conduct has prevented or lessened competition substantially, or that it is likely to do so in the future," the ruling stated.

The airport authority had told the Competition Tribunal it aims to foster competition but also has limited influence on the airline food market.

The tribunal appeared to disagree, finding that the Vancouver Airport Authority "substantially or completely controls the supply" of in-flight food and "does in fact have...a plausible competitive interest in that market."

Nonetheless, the two-member panel concluded unanimously that the airport operator "continues to have a legitimate business justification for engaging in the impugned exclusionary conduct."

The Competition Bureau said it is reviewing the decision to determine next steps.