Ottawa is unveiling several new taxes ranging from boats to cigarettes while also closing loopholes aimed at recovering evasive taxpayers in its first full fiscal plan since before COVID-19 hit.

Taxes will be introduced on luxury vehicle sales, vaping devices, and on corporations providing digital services to Canadians, while some loopholes on cross-border taxation and tax evasion will be closed, the government said in its budget, which is aimed at helping to fund the Liberals post-pandemic recovery. 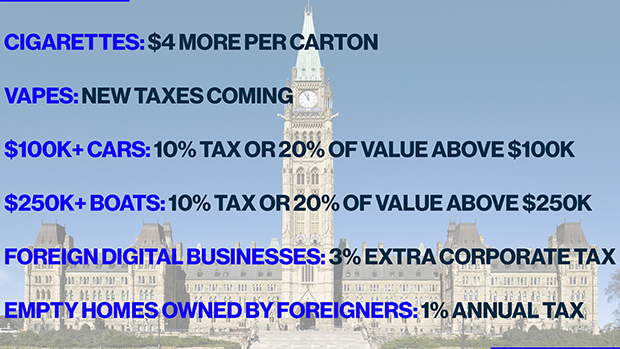 All told, the new taxes will contribute more than $10 billion to the government's revenue base and will be a crucial element of its plans to introduce billions of dollars in new spending on child care, Indigenous infrastructure, and green initiatives.

"To ensure our system is fair, this budget will invest in the fight against tax evasion, shine a light on beneficial ownership arrangements, and ensure that multinational corporations pay their fair share of tax in Canada," according to prepared remarks by Deputy Prime Minister and Finance Minister Chrystia Freeland.

The Liberal government proposes to increase the tobacco excise duty by $4 per carton of 200 cigarettes, which is expected to provide $2.1 billion in new revenue over the next five fiscal years. It also announced plans to introduce a new taxation framework for vaping products, but not those which contain cannabis.

It plans to formalize the digital tax it first announced in the 2020 Fall Economic Statement where large companies with gross revenue of 750 million euros ($1.13 billion) or more that provide online services to Canadians will be charged a three per cent fee on revenue derived in Canada. The government expects the new tax to raise $3.4 billion over the next five years.

The Liberal government also introduced a new luxury tax on the sale of cars and personal aircraft with a price tag above $100,000 and boats for personal use that cost more than $250,000. The new levy is expected to bring in an additional $604 million in new revenue over the next five years.

"If you’ve been lucky enough, or smart enough, or hard-working enough, to afford to spend $100,000 on a car, or $250,000 on a boat – congratulations! And thank you for contributing a little bit of that good fortune to help heal the wounds of COVID and invest in our future collective prosperity," Freeland wrote in the budget's foreward.

Foreign homeowners who leave their Canadian residential property vacant will also be charged a new national one per cent tax to be applied annually on the value of unused homes, effective Jan. 1, 2022.

The new tax will also require foreign homeowners to file a statement declaring the current use of the property, while the government plans to later release a consultation paper to determine if properties located in tourism or resort communities should have the levy applied. The government expects to see $700 million in new revenue over the next four years from the tax.

Ottawa is also planning to close some corporate tax loopholes, including those that allow large businesses to pay fewer taxes in Canada if they excessively deduct more interest on borrowing charges and cross-border tax schemes.

The Liberal government proposes to reduce the amount of interest they can deduct to no more than 40 per cent of their earnings in the first year it is implemented (2023), and 30 per cent afterward. That will help raise federal revenue by $5.3 billion over the next five years.

Meanwhile, cross-border tax loopholes that benefit multi-national businesses that exploit differences in Canadian and foreign taxes will be closed to help level the playing field for Canadian small and medium-sized businesses. The loopholes will be implemented in stages beginning on July 1, 2022, and is expected to add $775 million over four years to the government's coffers.

An additional $810 million over five years is expected to come through new measures the government plans to introduce to help strengthen the Canada Revenue Agency and its ability to crack down on tax avoidance and evasion. ​