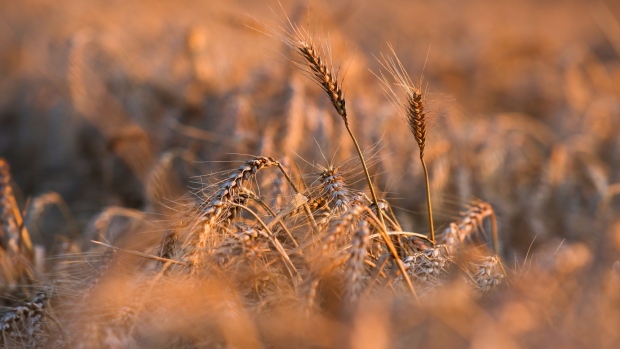 Ears of wheat during a harvest in Benfleet, U.K., on Tuesday, Aug. 24, 2021. Global wheat prices jumped after the U.S. shocked markets earlier in the month with a huge cut to Russia’s crop estimate, while there have been worsening production outlooks and quality issues in other major growers. Photographer: Chris Ratcliffe/Bloomberg , Bloomberg

(Bloomberg) -- Egypt is in talks with Citigroup Inc. to reach a deal on hedging against global wheat-price increases, the supply minister said, as the world’s biggest buyer of the grain struggles with rising commodity prices.

The ministry has also asked the Finance Ministry to reach a deal on hedging against vegetable oil price increases, Aly El-Moselhy told Bloomberg on Thursday. The moves comes as the government announced a price hike for subsidized cooking oil and re-entered the wheat market after balking earlier at the high prices.

Egypt already hedges against oil-price increases. The decision to adopt a similar approach for key commodities reflects mounting concern about the spike in global prices at a time when the government is looking to trim a costly food subsidy bill. That push is part of a broader effort to curb spending and funnel more funds to key projects critical for economic growth.

That’s raised Egypt’s costs at its wheat tenders to the highest in at least five years, and purchases by its state-run buyer are trailing the prior season. The country has also cancelled multiple tenders this year, an unusual occurrence, as it battles lofty prices and soaring freight costs.