It took a pandemic for America’s army of gig workers to win access to some of the social protections that regular employees enjoy. Now they’re about to lose it again.

Even before COVID-19 hit, the independent-contract model for workers was spreading, with companies turning to it as a way to lower costs. The health crisis accelerated that trend, and spurred policy makers to offer financial support for freelancers when much of the economy was shuttered.

The Pandemic Unemployment Assistance was the first federal-level program geared toward so-called independent workers. It’s now being wound down, leaving the Biden administration struggling to figure out how to make life less precarious for a rapidly growing share of the workforce. 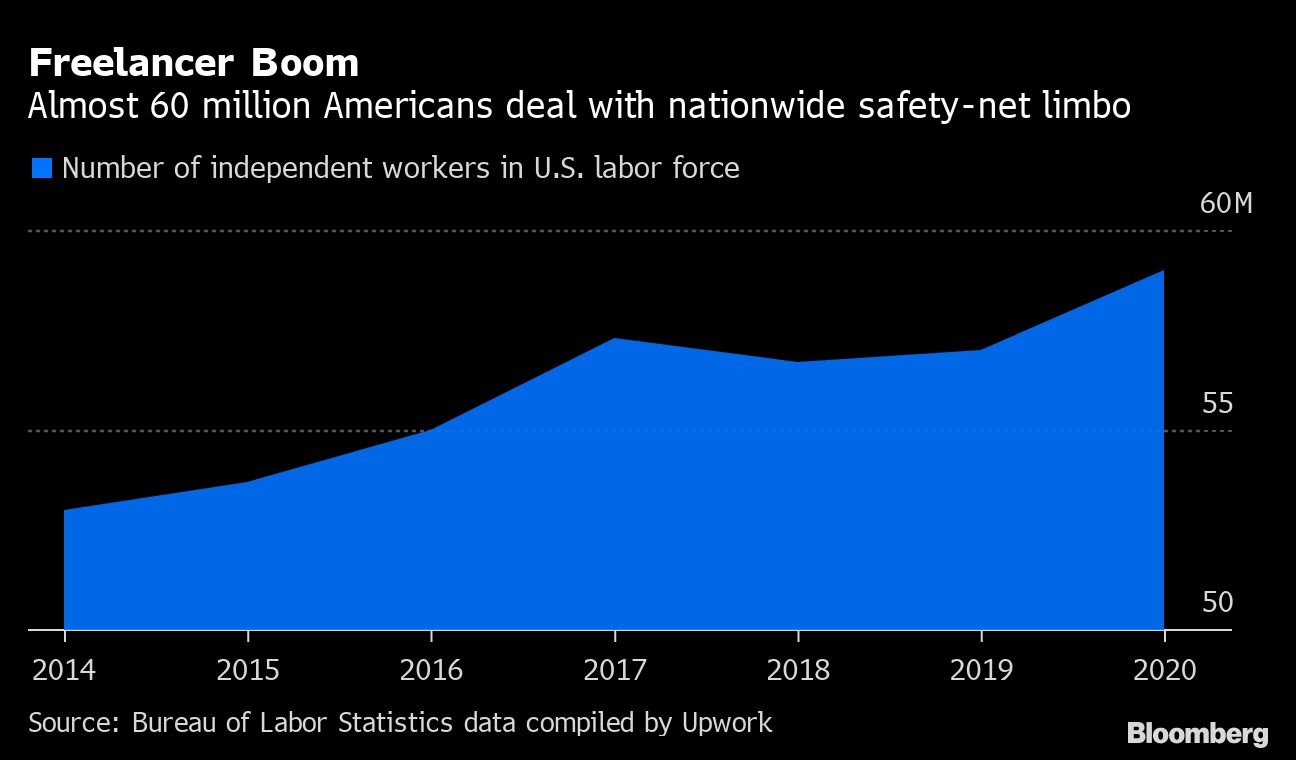 For Rubi Jones, a 33-year-old freelance hairstylist, the PUA was “a breath of fresh air.” In the absence of any safety net, her strategy often was to work long hours. When expecting her daughter, Jones cut hair until she was eight-and-a-half months pregnant, and she was back on the job four weeks after giving birth.

When the pandemic hit, that route was closed. “My work 1,000 per cent shut down,” she said. “From March 13 up until June, when re-openings happened in New York City, I didn’t touch hair except for my own.” Instead she enrolled in the PUA, like more than 15 million Americans did last summer.

There were still about 5.3 million participants in the program as of July 9, and an average of about 100,000 new claims have been filed each week since then. But at least half of U.S. states have already ended pandemic unemployment benefits, and more are set to follow before the Sept. 6 deadline set by Congress.

Some 59 million Americans freelanced in 2020, and the number is poised to increase. A new study by recruitment firm Upwork found that one-fifth of professionals -- equivalent to 10 million people -- would consider going freelance, mainly to preserve work-from-home flexibility. About 90 per cent of businesses expect to increase their reliance on non-payroll workers within the next year according to a June survey by contractor management company Stoke.

Instead, many U.S. gig workers are getting thrown back into the safety-net limbo that preceded the pandemic.

President Joe Biden has backed some measures that may offer them help. The Protecting the Right to Organize Act would make it easier for workers to unionize and collectively bargain, even if their companies claim they are contractors rather than employees.

But it faces a tough passage through the Senate, with Democrats short of votes to overcome a filibuster on top of a backlash from business. The National Retail Federation called it the “worst bill in Congress.”

Another bill in the Senate would allow big-name gig corporations to provide benefits to workers who aren’t formally employees -- but only for the duration of the pandemic. It’s also unclear how much the administration’s American Families Plan and American Jobs Plan would benefit freelancers.

There’s “still a big question mark” over how Biden will provide more security for this growing share of the population, said Rafael Espinal, executive director of the Freelancers Union, who reckons the PRO Act should be the top priority. 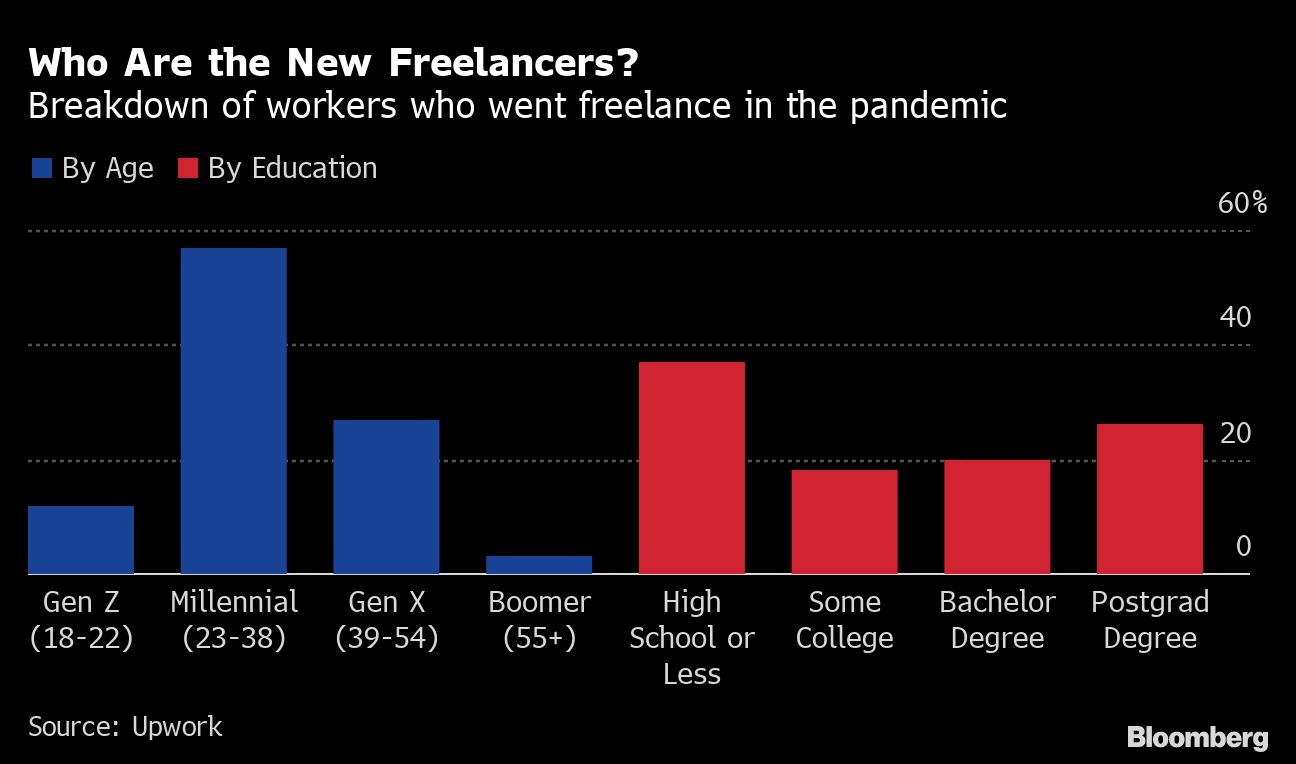 The unemployment insurance that the PUA offered isn’t the only safety net that freelancers aspire to.

“I want to have access to health insurance that actually takes care of me and my family,” said Jones, the hair stylist. Her family relies on policies made available by Obamacare provisions that have been challenged in Washington. “I want to not stay up at night worrying whether or not Congress is going to suddenly take that away,” she said.

Health care is precisely why companies fight to avoid having to pay benefits for contractors, said Joan Williams, a law professor at the University of California, Hastings. While other benefits like paid leave are “a small drop in the bucket,” companies often have to budget up to 45 per cent more when hiring to cover health-care-related costs, she said.

With few national protections, important parts of the freelance fight are happening at state level.

Seven states plus the District of Columbia currently allow independent workers to opt into paid family- and medical-leave programs, according to A Better Balance, a pro-worker advocacy organization. Others are examining whether their rules for classifying employees need to change.

A 2019 law in California illustrates some pitfalls in state-level efforts.

The measure was supposed to make it harder for employers to classify their workers as independent contractors. But gig companies like Uber, Lyft and DoorDash –- precisely the ones it was aimed at -- won exemption after spending US$200 million campaigning for a ballot initiative that voters approved last year. Corporations proved able “to buy themselves a carveout,” said Espinal.

Assemblywoman Lorena Gonzalez, the Democrat behind the law, said state actions can’t compare with a federal initiative like the PRO Act. “Any bill I pass is not going to be as strong as a collective bargaining agreement,” she said. Private-sector collective bargaining rights are generally governed by federal law, and states are restricted from addressing them.

In some states, freelancers don’t have any local or federal protections.

Dallas resident Elizabeth Silva Conrad, 51, began freelancing as a graphic designer when she lost her full-time job in 2015. She relied on the PUA for three months last year when her small-business clients shut down.

Silva Conrad said her family had a safety net all along because of her husband’s full-time job, which comes with “great medical, dental and optical insurance.” But she knows things are tougher for many of her Texan peers.

“I’m fortunate,” she said. “I know a lot of other women out there don’t have that.”