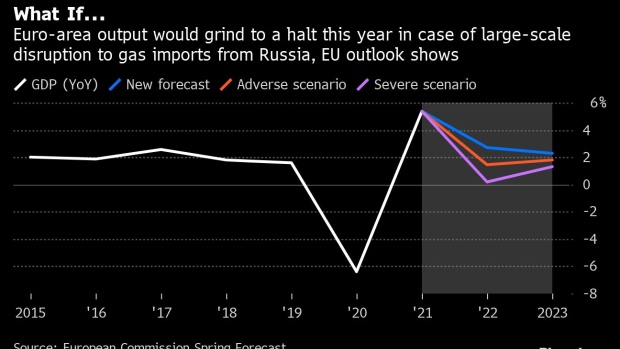 A worker turns a valve wheel at a gas well on the Gazprom PJSC Chayandinskoye oil, gas and condensate field, a resource base for the Power of Siberia gas pipeline, in the Lensk district of the Sakha Republic, Russia, on Tuesday, Oct. 12, 2021. European natural gas futures declined after Russia signaled that it may offer additional volumes soon. , Bloomberg

The euro area’s pandemic recovery would almost grind to a halt, while prices would surge even more quickly if there are serious disruptions to natural-gas supplies from Russia, according to new projections from the European Commission.

Under a severe scenario, the currency bloc’s economy would expand about 0.2% this year, with inflation topping 9%, as governments struggled to replace the imports, the EU’s executive arm said. In 2023, growth would be one percentage point below the baseline.

In the first EU forecasts since Russia invaded Ukraine and confirming an earlier Bloomberg report, officials also cut their base-case outlook -- predicting gross domestic product will advance 2.7% this year and 2.3% in 2023, down from February’s 4% and 2.7%.

“Russia’s invasion of Ukraine is causing untold suffering and destruction, but is also weighing on Europe’s economic recovery,” Paolo Gentiloni, the EU commissioner for the economy, said Monday in a statement. “Other scenarios are possible under which growth may be lower and inflation higher than we are projecting today.”

Russia war and the sanctions imposed in response have darkened the outlook for the global economy by sending energy prices surging and straining supply chains that were already reeling from the pandemic. The euro zone is among the worst-hit regions because of its reliance on Russian energy and proximity to the conflict.

Disruptions to Russian gas flows remain a key risk, threatening shortages that could push countries like Germany, the region’s largest economy, into recession. Chancellor Olaf Scholz has warned of a serious economic crisis in such a scenario.

The commission has so far proposed a ban on Russian oil, which is seen as a less costly step. The plan has, however, run into opposition from Hungary, causing EU diplomats to consider a delay.

The ECB, meanwhile, is set to withdraw more stimulus, with President Christine Lagarde maintaining that stagflation isn’t the most likely outcome for the euro zone. Policy makers are honing in on an interest-rate increase in July and are increasingly embracing a scenario of raising borrowing costs above zero this year.

The euro has slid in recent weeks as the Federal Reserve moved to tackle inflation in the US, moving closer to parity with the dollar. That’s compounding the inflation challenge for the currency bloc by making imports such as energy more expensive.

The commission said prolonged support from governments means euro-area fiscal policy is set to remain supportive. Government debt as a share of economic output is still projected to fall to 93% in 2023, from a historic peak of almost 100% in 2020.