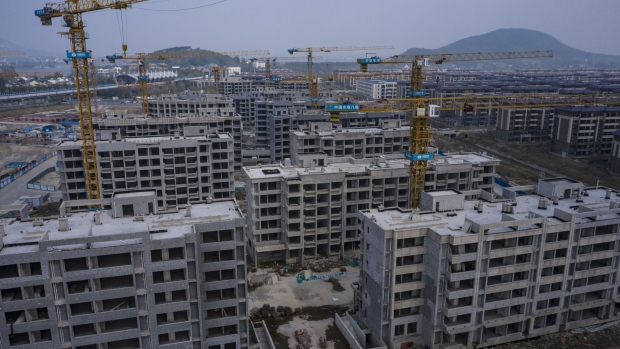 Unfinished apartment buildings at China Evergrande Group's Health Valley development on the outskirts of Nanjing, China, on Friday, Oct. 22, 2021. China Evergrande Group pulled back from the brink of default by paying a bond coupon before Saturday’s deadline, giving the property giant at least another week to come to grips with a debt crisis that has rattled investor confidence in the world’s second-largest economy. Photographer: Qilai Shen/Bloomberg

Some investors received a coupon payment on a China Evergrande Group dollar bond before a grace period ended Saturday, according to people with knowledge of the matter.

The initial deadline was Sept. 23, which passed with no sign that investors had been paid. At least two holders of the 8.25 per cent dollar note maturing in March 2022 received the payment, the people said, asking not to be identified because the matter is private. Prices of these and other Evergrande notes rose Monday, though they’re still deep in distressed territory.

The reported shift to the electric-car business will be a challenge given that Evergrande has yet to deliver a single vehicle, despite Hui’s ambitions to take on industry giants such as Tesla Inc. The world’s most indebted developer is struggling with a cash crisis that has led it to consider selling stakes in units including Evergrande NEV. 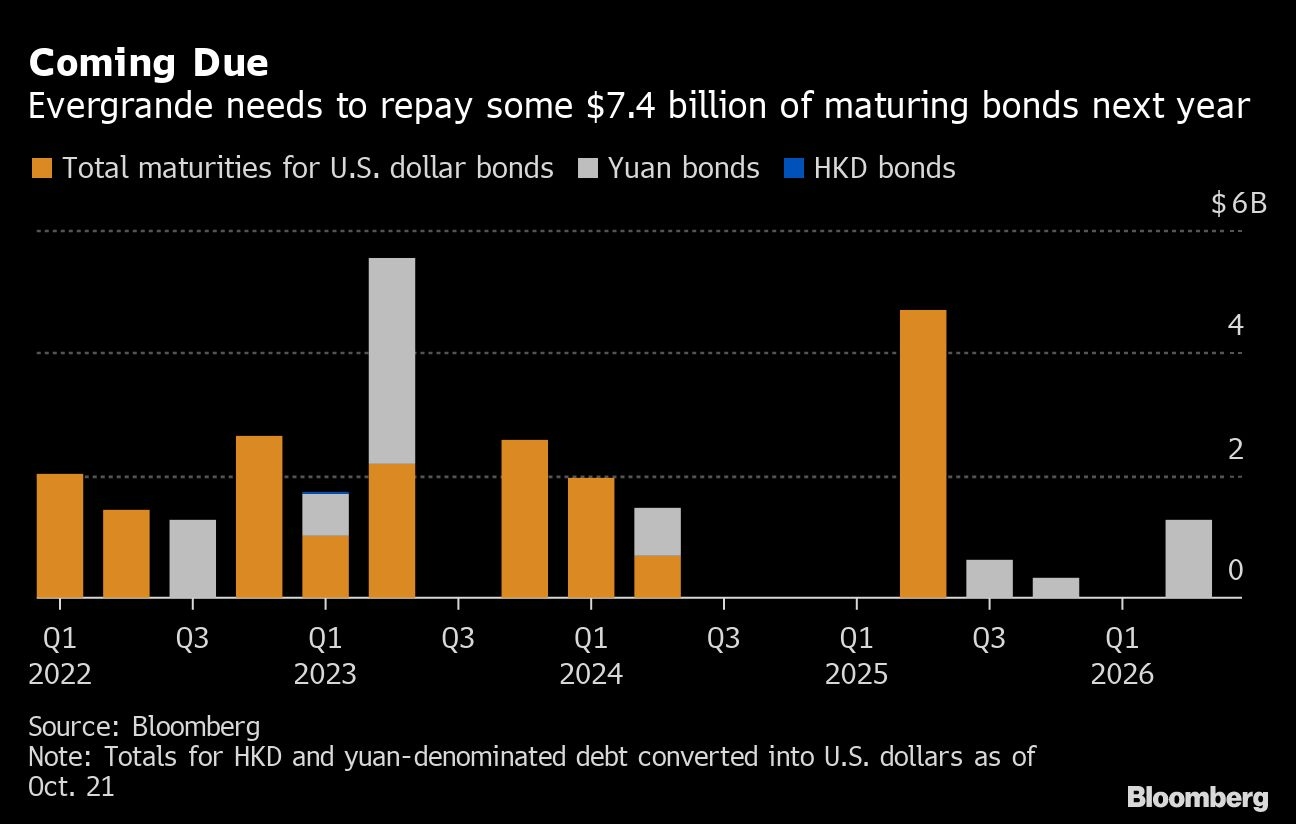 Focus now turns to the end of a grace period on another Evergrande dollar bond later this week. Any reprieve from debt payments may be short-lived as the embattled developer still has more than US$300 billion in liabilities.

The company has just kicked the can down the road with its latest payment, according to Monica Hsiao, founder and chief investment officer of Triada Capital. The payment gives Evergrande more time to sell assets and raise cash to pay creditors and suppliers, analysts said.

Credit-rating cuts for Chinese developers have accelerated further in October, hitting a record high for a second straight month. There were 44 reductions by Moody’s Investors Service, S&P Global Ratings and Fitch Ratings as of Oct. 21, after 34 downgrades for all of September, according to Bloomberg-compiled data. 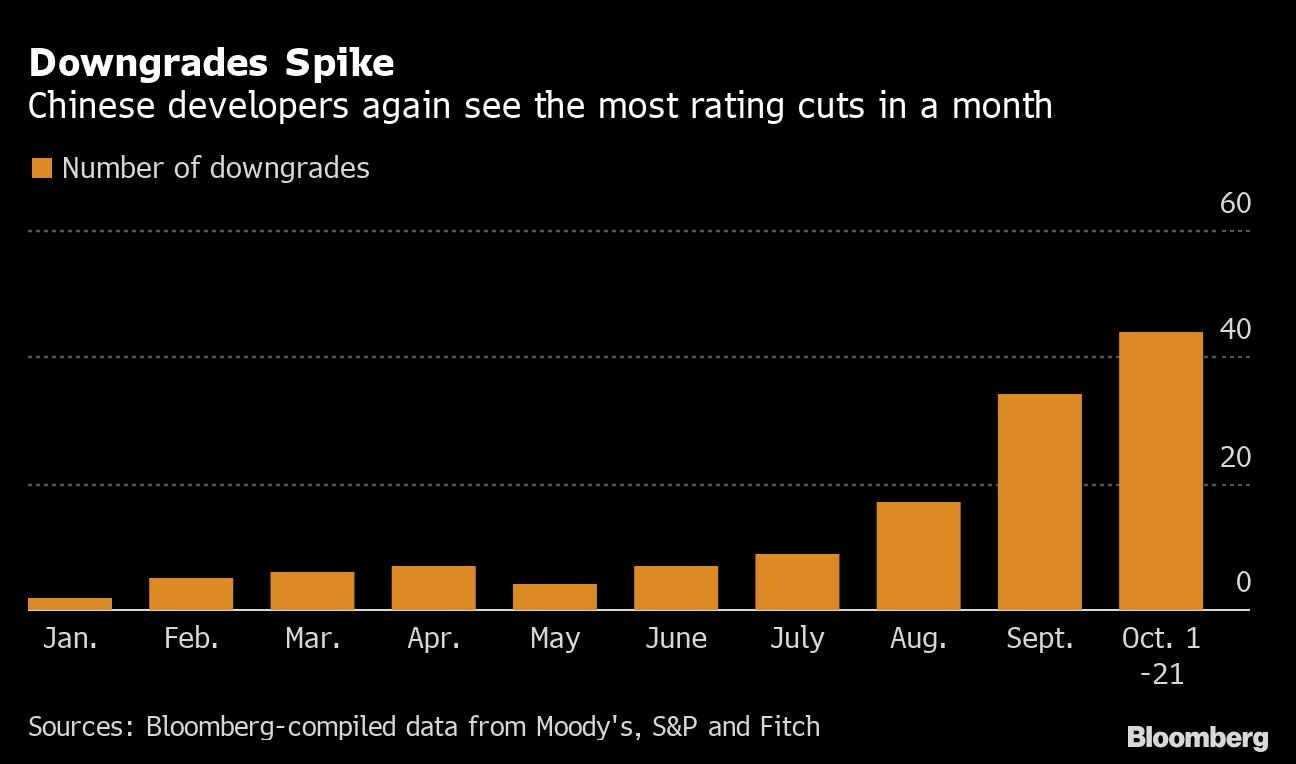 People familiar with the matter said on Friday that Evergrande wired the US$83.5 million coupon and bondholders would receive the funds before Saturday.

Evergrande creditors are still bracing for an eventual debt restructuring that could rank among the largest-ever in China. News on the payment had boosted sentiment in China’s high-yield dollar bond market for a time Friday.

HSBC Holdings Plc said it’s “highly selective” in its exposure to the mainland Chinese real estate market, which has been the subject of investor concerns amid debt repayment struggles.

The Evergrande situation has been “well telegraphed” to the market, CFO Ewen Stevenson said in an interview on Bloomberg Television. He doesn’t expect HSBC to see “any material fallout” from it. Hong Kong’s real-estate market has been resilient through many cycles, and Stevenson doesn’t see any spillover effect.

Shares of Chinese developers dropped, as the government’s program to expand property-tax trials damped a recent upturn in sentiment.

Shares of China Evergrande New Energy Vehicle Group closed 11.4 per cent higher at the close in Hong Kong. The Securities Times reported Friday that Chairman Hui said he plans to scale down real-estate operations to focus on new energy vehicles.

The company’s first electric car - “Hengchi” - will be delivered from its Tianjin factory at the start of next year, according to an Oct. 11 statement on Evergrande’s website, which also referred to a “three-month war” to tackle the main challenges in EVs.

The more-than-usual liquidity injection by the Chinese central bank signals the importance of ensuring market stability ahead of a key political event in November, says Winson Phoon, head of fixed income research at Maybank Kim Eng Securities in Singapore.

The amount “appears to be slightly more ample than usual” and along with other recent developments such as the easing of property sector restrictions and a tech crackdown potentially nearing the tail end, the move seems necessary to ensure market stability and underpin confidence ahead of the 6th plenum party meeting in November, Maybank said.

China sought to ally concerns about the economy’s slowdown with a lengthy state media commentary outlining how the government is managing risks and remains confident about achieving its targets for the year.

Weaker growth in the third quarter was the result of fading low-base effects and various short-term shocks such as floods and virus outbreaks, according to an article published Sunday by the official Xinhua News Agency, and republished by major newspapers including Securities Times and People’s Daily.

Evergrande kicked the can down the road, Triada Capital says (9:20 a.m. HK)

It made sense for Evergrande to pay its dollar bond coupon before the end of the grace period to gain time while figuring out a “comprehensive resolution” to the saga, according to Triada Capital’s Hsiao.

Overreaction across the market has created dislocation across BB and select B rated issuers, though default rates are expected to rise, she said in a Monday interview with Bloomberg Television. Winners will be those that made contingency plans and have the ability to ride through the next 6-8 months, as well as firms able to sell assets and pay down debt using their cash balance, she said.

China’s economy risks slowing faster than global investors realize as President Xi Jinping’s push to cut its reliance on real estate and regulate sectors from education to technology combine with a power shortage and the pandemic.

Bank of America Corp. and Citigroup are among those sounding the warning that expansion will fall short this year of the 8.2 per cent anticipated by the consensus of economists. The slump could last into next year, forcing growth below 5 per cent, they warn. Outside 2020’s 2.3 per cent, that would be the weakest in three decades.

Strategists at Bank of America muse that Xi may even be embracing a once-in-two decades restructuring of the economy akin to Deng Xiaoping’s modernizations of the late-1970s and Zhu Rongji’s revamping of state-enterprises and finance in the 1990s.