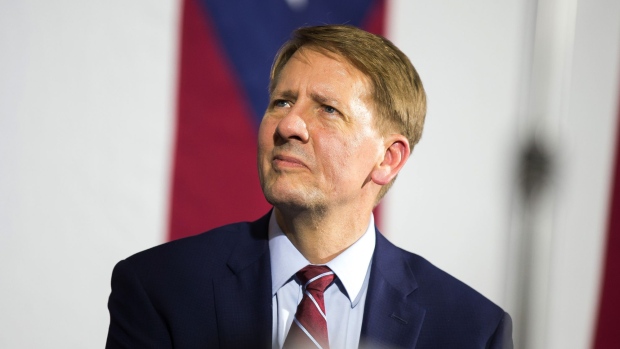 (Bloomberg) -- The White House is considering several candidates to serve as the Federal Reserve’s top banking watchdog including Richard Cordray, the former director of the Consumer Financial Protection Bureau, according to people familiar with the matter.

President Joe Biden hasn’t made a decision and Cordray, a Democrat who ran for Governor of Ohio in 2018 and lost, is among a few names the administration is weighing, the people said, asking not to be identified because the talks are private.

President Biden has three vacancies to fill at the Fed after selecting Chair Jerome Powell for a second term and elevating Lael Brainard to vice chair last week. The supervision vice chair is Washington’s most powerful banking overseer, inspecting and setting rules for the nation’s largest banks like Citigroup Inc. and JPMorgan Chase & Co. The watchdog supervises annual stress tests that verify the health of the big lenders and would be expected to play a leading role in the Biden administration’s financial regulatory policies, including on cryptocurrencies.

Other potential candidates that have been discussed for the Fed regulator job include ex-Fed Governor Sarah Bloom Raskin and Raphael Bostic, president of the Federal Reserve Bank of Atlanta.

Biden has promised to make the Fed board more diverse.

“I look forward in the coming weeks to nominating additional members of the Federal Reserve Board of Governors, including a new vice chair for supervision,” Biden said when announcing his pick for Fed Chair on Nov. 22. “My additions will bring new perspectives and new voices. I also pledge that my additions will bring new diversity to the Fed, which is much needed and long overdue, in my opinion.”

Cordray was the first director of the CFPB, a regulator created in the wake of the 2008 financial crisis to protect Americans from fraud and other financial abuses. One of the agency’s most high-profile enforcement actions during Cordray’s tenure was against Wells Fargo & Co. for opening accounts without customers’ knowledge.

Democrats like Senator Elizabeth Warren and progressive groups have a keen interest in who fills the Fed supervision job. They’ve been publicly calling for somebody who would be able to stand up to Wall Street -- and Cordray would fit that bill. He’s well known to Warren, who was instrumental in putting him at the CFPB, and he also served as Ohio’s attorney general.

The vice chair for supervision seat is currently vacant. Fed Governor Randal Quarles’s term expired in October and he is stepping down as a Fed governor by the end of the year. A former Carlyle Group Inc. executive and banking attorney, Quarles was seen as friendly to Wall Street and loosened a number of government strictures put in place after the economic crisis that the industry considered over reach.