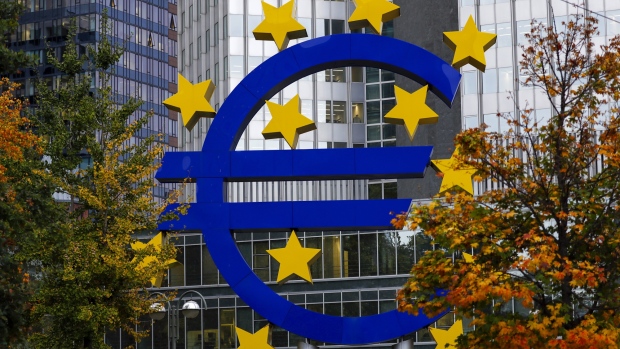 The euro sign sculpture stands outside the former European Central Bank (ECB) headquarters in Frankfurt, Germany, on Monday, Oct. 21, 2019. U.K. Prime Minister Boris Johnson is making a fresh bid to deliver on his promise to take Britain out of the European Union on Oct. 31 amid mounting optimism that he now has the backing to get his deal through Parliament. , Bloomberg

Investors showered love on Europe’s junk-bond exchange-traded funds during the first half of the year, enjoying stellar returns. The devotion is fading.

BlackRock Inc.’s IHYG -- the largest ETF tracking the debt -- has seen outflows in 13 of the past 14 weeks, losing over 1.1 billion euros (US$1.2 billion) during that period, according to data compiled by Bloomberg. That marks a break from this year’s record run of inflows as traders fleeing negative yields pushed assets to around US$10 billion.

Investors may be prepping for a market storm. Global trade tensions, economic weakness in the region and the ever-present Brexit threat prompted the European Commission to cut its euro-area growth and inflation outlook this week. Some investors may be cashing out after European high-yield debt’s strongest year-to-date performance since 2012.

“Euro credit has been such a good trade this year that many investors are willing to take profits and lock in return on their portfolios as we come into the year end,” said Chanchal Samadder, head of product strategy at Lyxor ETF. “Some fixed-income investors may be positioning more defensively, reversing back into investment grade and government bonds, as they sense a downturn is closer.”

High-yield corporate debt has been one of the biggest beneficiaries of central-bank stimulus, which has squeezed spreads in better-quality bonds and forced investors to seek returns elsewhere.

Despite the recent exodus, year-to-date inflows into European junk-bond ETFs still total 5.9 billion euros, more than in any full year going to back to at least 2010, according to the data. Flows in the U.S. have remained resilient, with more than US$6.2 billion pouring into the products during September and October.

Strategists at Societe Generale SA are among those warning that the strong allocations to credit ETFs at the start of the year have created a powder keg.

A scenario of “mild recession” -- the bank’s base case -- where corporate earnings deteriorate would put particular stress on the high-yield segment of the credit market, strategists argued in a recent note.

While institutions would be expected to continue buying credit thanks to low yields on government bonds, ETF holders have “been largely untested so far.” With liquidity “already at very low levels,” a mass unwind by these investors could quickly make things worse, strategists led by Arthur Van Slooten wrote.

“The time to reduce credit fund holdings under relatively favorable liquidity conditions is becoming quite limited,” they wrote.