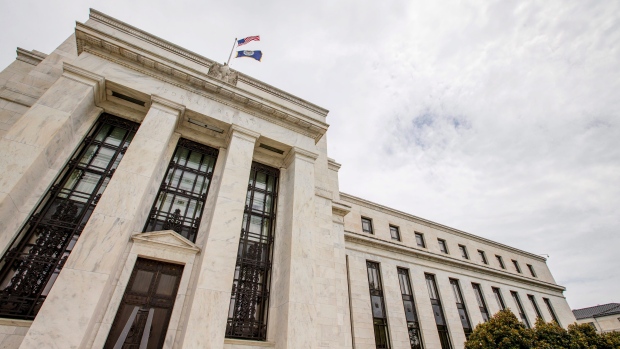 The U.S. economic expansion rolled along and labor markets tightened in June and early July, even as tariffs heightened concern among manufacturers and boosted some producer prices, a Federal Reserve survey showed.

The central bank’s Beige Book economic report, based on anecdotal information collected by the 12 regional Fed banks through July 9, said 10 of the districts reported “moderate or modest” growth.

“Manufacturers in all districts expressed concern about tariffs and in many districts reported higher prices and supply disruptions that they attributed to the new trade policies,” according to the report, released Wednesday in Washington. “All districts reported that labor markets were tight and many said that the inability to find workers constrained growth.”

The report reflected growing anxiety among American companies over the potential impact of trade disputes initiated by President Donald Trump. The levies helped lift lumber and metals prices, though there was only a “slight to moderate” passing along of those costs to consumers.

Pricing pressures are expected to intensify further in some districts, according to the Beige Book. In others, they will continue at a modest to moderate pace.

The U.S. has slapped tariffs on steel and aluminum shipments from trade partners, and targeted US$34 billion in Chinese imports, with another US$16 billion to follow soon. China, the European Union and others have retaliated with duties on American exports.

“In general, countries that have remained open to trade, that haven’t erected barriers including tariffs, have grown faster. They’ve had higher incomes, higher productivity,” he said in testimony before the Senate Banking Committee. “Countries that have gone in a more protectionist direction have done worse.”

He repeated some of those concerns Wednesday in testimony to the House Financial Services Committee.

Deutsche Bank AG economist Torsten Slok wrote in a note to clients Wednesday that an economic slowdown caused by trade disputes is “the most important downside risk to rates, equities and the dollar over the coming months.”

The rising input costs are among the many increased expenses facing companies, according to the Fed’s regional survey. Most districts said employers had difficulty finding qualified workers, with some districts saying firms were paying more to attract and retain workers. Wage gains were described as modest to moderate.

The report adds to the evidence the Fed is analyzing to maintain its current path of gradual interest-rate increases, pointing toward one or two additional hikes this year. The policy-making Federal Open Market Committee has already lifted borrowing costs twice in 2018 and next gathers July 31 and Aug. 1 in Washington.

U.S. unemployment dipped to 3.8 per cent in May, matching its lowest level since 1969, before ticking up to 4 percent in June. Wages, however, have continued to rise only moderately, with year-on-year gains in hourly earnings hitting 2.7 per cent in June.

The U.S. economy grew at a 2 per cent annual rate in the first quarter and that pace is expected to double to 4 percent in the second quarter, according to analysts surveyed by Bloomberg.