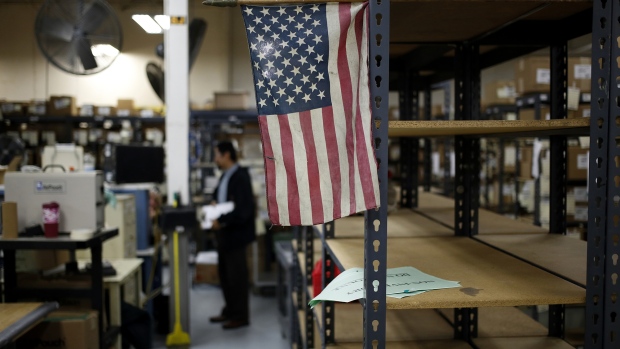 The U.S. economy expanded at a “slight to modest pace” in recent weeks, representing a mild downgrade by the Federal Reserve in its latest report card of the country's economic health.

“Business contacts mostly expect the economic expansion to continue, however, many lowered their outlooks for growth in the coming 6 to 12 months,” according to the report released Wednesday in Washington.

In contrast, the report said household spending was “solid,” and activity in non-financial services “increased solidly.”

Like the Sept. 4 Beige Book, this report, prepared by the Cleveland Fed, is likely to provide ammunition for policy makers on both sides of a divided Federal Open Market Committee, which gathers on Oct. 29-30 in Washington.

Opinions on the Federal Open Market Committee appear split ahead of the meeting, recent comments from officials on both sides of the debate show, though Chairman Jerome Powell hasn’t indicated whether he favors another cut.

The Fed has lowered its benchmark rate twice this year to bolster the economy against slowing global growth and uncertainty caused by President Donald Trump’s trade dispute with China. Pricing in fed funds futures contracts implies investors see a roughly 80 per cent chance of a cut at this month's meeting.

Employers continued to report worker shortages across skill levels and occupations. Even in the slowing manufacturing sector, employers resisted laying off workers.

“Some firms were more concerned about the longer-term availability of workers and subsequently chose to reduce hours rather than staff levels,” the Fed said.

Price increases were modest, according to most districts. While retailers and manufacturers reported rising input costs, retailers “had relatively more success passing through thesecost increases to their customers.”

The Boston Fed reported an unexpectedly poor summer tourist season on Cape Cod and suggested increased shark sightings may be to blame.