The Federal Reserve is poised to spray trillions of dollars into the U.S. economy once a massive aid package to fight the coronavirus and its aftershocks is signed into law. These actions are unprecedented, going beyond anything it did during the 2008 financial crisis in a sign of the extraordinary challenge facing the nation.

The coming rain of credit -- historic in both size and scope -- will be made possible by US$454 billion set aside in the aid package for Treasury to backstop lending by the Fed. That’s money the central bank can leverage to provide massive amounts of financing to a broad swathe of U.S. borrowers.

“Effectively one dollar of loss absorption of backstop from Treasury is enough to support US$10 worth of loans.” Fed Chairman Jerome Powell said in in a rare nationally-televised interview early Thursday morning. “When it comes to this lending we’re not going to run out of ammunition.”

He told NBC’s “Today” show that the Fed was trying to create a bridge over what may well be a substantial decline in the economy in the second quarter, to a resumption of growth sometime in the latter half of the year.

“It’s very hard to say precisely when that will be,” he said. “It will really depend on the spread of the virus. The virus is going to dictate the timetable here.”

While the Fed can help by keeping interest rates low and ensuring the flow of credit, “the immediate relief” for Americans will come from the Congressional aid package, Powell said. The bill includes direct payments to lower- and middle-income Americans of US$1,200 for each adult and US$500 for each child.

Combined with an unlimited quantitative easing program, the Fed’s souped-up lending facilities are set to push the central bank’s balance sheet up sharply from an already record high US$4.7 trillion, with some analyst saying it could peak at US$9-to-US$10 trillion. 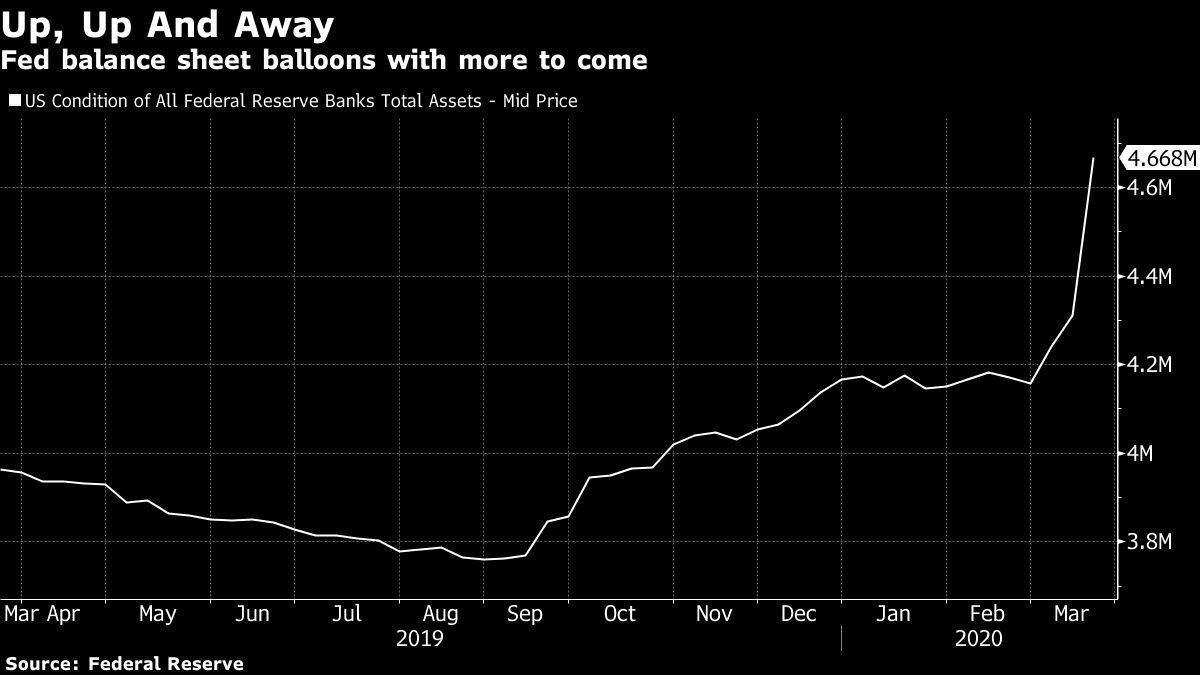 The bill passed the Senate late on Wednesday and is now being considered by the House.

The first order of business for the Fed -- once it has been signed into law by President Donald Trump -- will probably be to beef up some of the emergency lending facilities it’s already rolled out, particularly the ones for corporations which were limited by the amount of money that was available from Treasury prior to the aid package.

The central back is then expected to establish its so-called Main Street Business Lending Program to provide help to smaller firms.

“Very quickly we hope to stand up a very broad based lending facility that could be leveraged up to US$2 or US$3 trillion,” Senator Pat Toomey told reporters Wednesday. “We’re hoping it’s a mechanism to keep businesses alive for a few weeks or months until our economy can resume.”

House Speaker Nancy Pelosi is also pushing Powell and the Fed to do more for hard-pressed state governments on the front lines of the fight against the virus.

“I’m telling him to think big and help our states because they are taking a big bite of this wormy apple and they need much more in terms of resources,” the California Democrat told the PBS NewsHour television program on Wednesday.

In his “Today” show interview on Thursday, Powell said the Fed was “already helping state and local governments” -- an apparent reference to the inclusion of some municipal debt in the central bank’s commercial paper and money market financing facilities.

It was the late economist Milton Friedman who floated the idea of a helicopter drop of money into an economy fighting a severe recession. Former Fed Chairman Ben Bernanke later described that approach more prosaically as a broad-based tax cut financed by the central bank.

This is different. Rather than the Fed financing the federal government, Congress is providing money to absorb any losses the central bank may incur on its emergency loans -- some of which will be going to riskier borrowers.

And unlike helicopter money, the ramped up lending is aimed not at stimulating the economy but rather at preventing a credit crunch that could make the recession worse.

“This is helicopter credit,” said Wrightson ICAP chief economist Lou Crandall. “They’re still in the fireman role rather than the stimulus role.”