Federal Reserve officials will pull the trigger on another interest-rate increase next week before slowing the pace of hikes in 2019 as risks to the U.S. economy mount, according to a new Bloomberg survey of economists.

They expect the Fed will raise rates by a quarter percentage point at its Dec. 18-19 meeting while dialing back the number of moves next year to two, in March and September, from the three hikes economists saw in September. Median responses in the Dec. 7-11 poll also anticipate one additional hike in mid-2020 when the rate would peak in this tightening cycle at a target range of 3 per cent to 3.25 per cent. 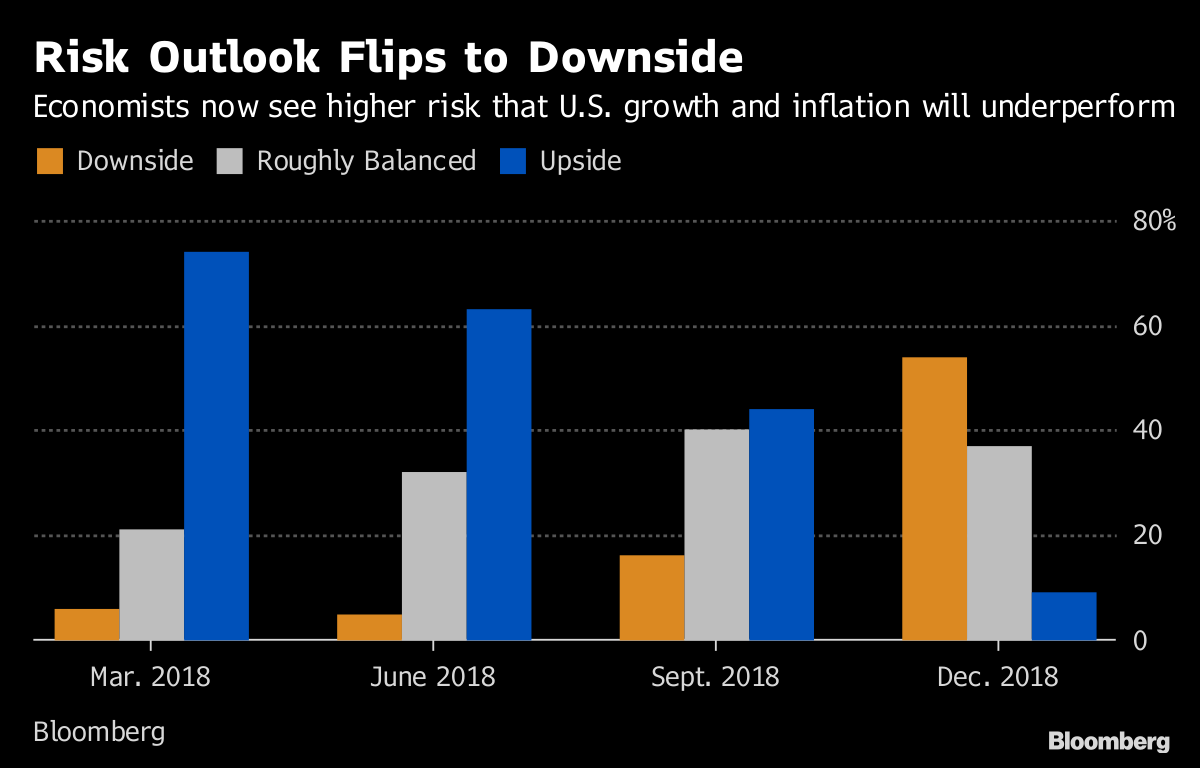 The somewhat more dovish expectations fit with a more cautious tone projected in recent weeks by Fed policy makers, including Chairman Jerome Powell, and with the anxiety exhibited in financial markets. Since the end of September, the S&P 500 Index of U.S. stocks has plunged more than 9 percent.

“There’s still some upside potential, but there is a whole laundry list of factors” that will either slow the economy or threaten to slow it, said Scott Brown, chief economist at Raymond James in St. Petersburg, Florida.

He included the waning impact of stimulative U.S. fiscal policies, the trade dispute with China, a potentially chaotic exit for the U.K. from the European Union, and the possibility the Fed might tighten too much.

Investors see around an over 70 per cent chance the Fed will move next week and are betting on less than one full quarter-point increase in 2019, according to pricing in interest rate futures.

More than half the economists said risks, with respect to growth and inflation, were now tilted to the downside. In September just 16 per cent of respondents had that view. Upside risks had dominated responses to this question in each survey of this quarterly series since December 2017.

Despite the shift, economists didn’t expect Fed officials to make as strong a turn in their post-meeting statement. About two-thirds said the Fed will stick with language stating “near-term risks to the economic outlook appear roughly balanced.” Just 6 per cent anticipate the Fed will characterize risks as tilted to the downside.

“From a communications standpoint, the Fed does not want to appear overly dovish,” said Gregory Daco, chief U.S. economist at Oxford Economics in New York. “The pivot we saw over the last 10 days was enough,” he said, referring to speeches from both Powell and Fed Vice Chairman Richard Clarida.

Nor did the economists surveyed expect policy makers to alter their forecasts for growth, unemployment or inflation in the next three years.

A number of respondents, however, do expect a separate, meaningful change to the statement; 39 percent believe policy makers will drop language declaring the need for “further gradual increases.” That percentage rises to 72 per cent by March. Such a move could be construed as dovish, but may also simply reflect what Powell has already said publicly: The Fed is closing in on the range where it’s likely to stop lifting rates.

Economists rejected the notion that President Donald Trump’s repeated criticism of Fed rate hikes would impact the central bank’s decision-making, with 88 per cent saying it would have no influence.

Respondents were also asked to weigh in on a subject of hot debate on Wall Street: whether the central bank’s balance sheet reduction is creating a scarcity of excess bank reserves and, as a result, making it difficult for the Fed to control the effective fed funds rate. Some analysts claim this will force the Fed to abandon the runoff next year.

Economist in the survey, however, roundly dismissed this claim, with 83 per cent saying the runoff will continue at least through 2019, including 56 per cent who say it will run beyond 2020.