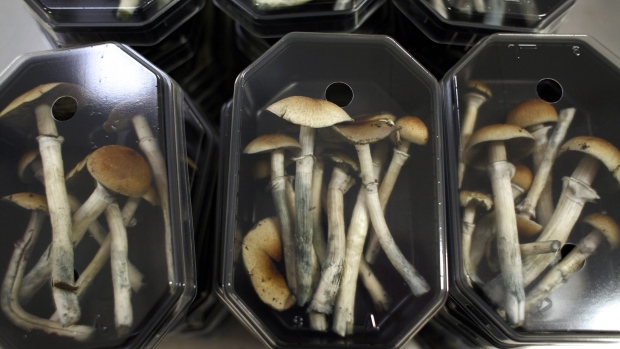 As cannabis legalization spreads across the globe, another mind-altering drug is trying to follow in its tracks: magic mushrooms.

Denver voted in May to decriminalize the fungus that contains psilocybin, a psychedelic compound popularized by ’60s counterculture. Oakland, California followed Denver’s lead a few weeks later and Oregon is trying to get a similar measure on the ballot for 2020.

Advocates say mushrooms have untapped medical potential that could be as big as cannabis, particularly for treating depression and addiction. The U.S. Food and Drug Administration granted “breakthrough therapy” status in October to Compass Pathways Ltd. to test the drug for treatment-resistant depression, expediting the development process. The London-based company says it’s now proceeding with a large-scale clinical trial in Europe and North America.

In recent years, researchers at New York University found psilocybin caused a “rapid and sustained” reduction in anxiety and depression in patients with life-threatening cancer. And psychiatrists at Johns Hopkins University discovered mushrooms can help people quit smoking. Another study found the psychedelic can also help with alcohol dependence.

“The medical and therapeutic applications are becoming incontrovertible in a world where depression is one of the most commonly diagnosed conditions,” said Ronan Levy, a former executive at Aurora Cannabis Inc. and co-founder of Toronto-based Field Trip Ventures, a startup focused on therapeutic psychedelics including mushrooms.

Levy believes it’s only a matter of time before others -- including many former cannabis executives -- realize the potential of psychedelics and start to look for investors. Interest is already starting to grow in some fields. Sanjay Singhal, the founder of Audiobooks.com, is funding research into psilocybin and other psychedelics, including a planned study into micro-dosing at the University of Toronto’s Center for Psychedelic Studies.

Unlike cannabis, however, research into psilocybin’s medical applications is limited by the fact that the drug remains illegal virtually everywhere. Denver, for example, has made personal use and possession of mushrooms “the city’s lowest law-enforcement priority” but selling and distributing the drug is still illegal.

This has been challenging for psychotherapists like Bruce Tobin, a registered clinical counselor in Victoria, British Columbia who specializes in treatment of anxiety, depression and emotional trauma.

Tobin has asked the Canadian government for what’s known as a Section 56(1) exemption, which gives researchers and physicians access to substances that are prohibited under the country’s Controlled Drugs and Substances Act. He believes there are about 3,000 people in Canada suffering from end-of-life distress who aren’t responding to other depression treatments.

“This is a group for whom it’s literally true that they have nothing left to lose, and our argument is that for these particular people, psilocybin counts as a reasonable medical treatment for them right now,” even before advanced clinical trials have been completed, he said.

Tobin doesn’t expect to be successful but is prepared to go to court to fight the decision, much the same way marijuana advocates did in the landmark cases that led to medical pot legalization in 2001.

Although he sees the cannabis rulings as setting “extremely strong legal precedence” for psilocybin, he doesn’t want to see mushrooms follow the same path to legalization as pot. The high from mushrooms lasts longer and can be much more intense than cannabis and sometimes accompanied by hallucinations, nausea and the risk of a “bad trip.”

“I’m a little uneasy that there are many entrepreneurs in Canada that see psilocybin as the next big thing, and I want to discourage that,” Tobin said. He sees the drug as one part of an ongoing psychotherapy process that should only be done under the supervision of a specialist, and believes some people should never take psychedelics at all.

“I don’t want this to sound too literal, but between cannabis and psychedelics, it’s sort of the difference between conventional and nuclear weapons,” he said. “I don’t see psilocybin as something that will become legal in Canada or necessarily ever should be.”