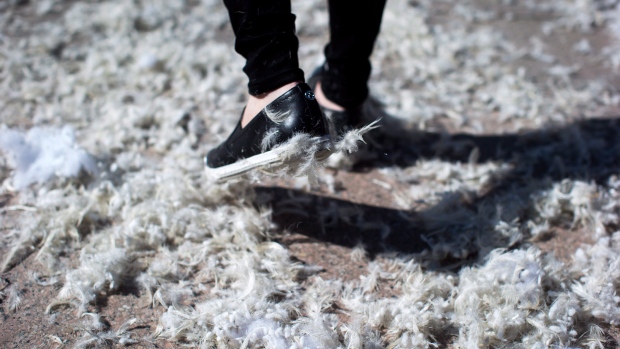 Feathers stick to a woman's shoe as she participates in an organized pillow fight in downtown Vancouver, B.C., on Saturday April 2, 2016 , The Canadian Press

U.S. President Donald Trump took aim at Canadian dairy, lumber and energy this week, as part of his ongoing ‘America First’ message. While these commodities are important export items for Canada, there are a number of lesser-known, and some might say just plain weird, resources the country trades south of the border and to other parts of the world. Here’s a look at some of them:

Human hair. Between November 2016 and February 2017, Canada has imported $21,626 dollars worth of unworked, washed or scoured human hair globally, mostly from New York. However, it didn’t export any during that time.

Feathers. Germany spent the most of any country, $244,000 worth, on Canadian feathers used for stuffing down between December and February. Canada only imported down feathers from one country – the U.S. – between November and February and spent about $2.8 million.

Animal guts, bladders and stomachs. In February, Canada sold nearly $5.5 million worth of animal guts internationally, with the biggest receiver being China, closely followed by the U.S. and Mexico. In the same month, Canada imported $1.6 million worth, mostly from the United States.

Whalebone, horns. Canada exported roughly $471,000 worth of whalebone and horns to two countries – United States and Belgium – between November and February. We imported about $47,000 total in February alone, mostly from the U.S.

Ivory. Canada exported $117,203 worth of ivory to China and Japan between November and February. We only received a small amount, mostly from Morocco.

*All data from Statistics Canada