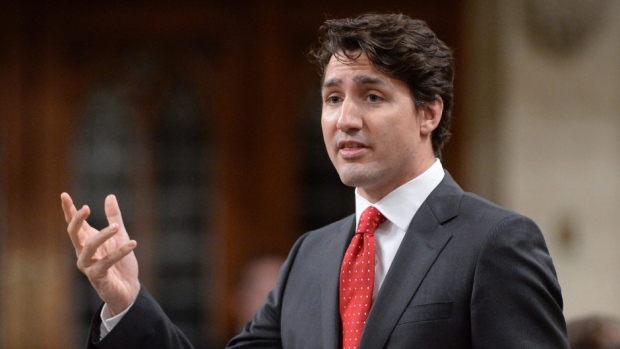 TORONTO -- Canada's prime minister said Friday that he plans to be respectful and engage the United States with a fact-based approach to solving problems a day after President Donald Trump called Canada a "disgrace" for policies that hurt American farmers.

Justin Trudeau said during a news conference alongside visiting Italian Prime Minister Paolo Gentiloni on Parliament Hill that he will stand up for Canada's interests and people.

"The way to do that is to make arguments in a respectful fashion, based on facts, and work constructively and collaboratively with our neighbours," said the Liberal leader.

“I will always defend Canadian interests,” Trudeau told reporters Friday afternoon, when asked about Trump’s recent remarks about trade with Canada. “There is no international free market with it comes to agriculture – every country supports its farmers in different ways. And in Canada I will continue to defend supply management.”

Trump took aim at Canada's dairy industry this week for creating a new lower-priced classification of milk product that he argues hurts U.S. producers. Trump said it has put farmers in Wisconsin and New York state out of business.

Canada changed its policy on pricing domestic milk to cover more dairy ingredients, leading to lower prices for Canadian products including ultra-filtered milk that compete with U.S. milk. Canada's dairy sector is protected by high tariffs on imported products and controls on domestic production as a means of supporting prices that farmers receive.

Trump said on Thursday "what they've done to our dairy farm workers is a disgrace".

The U.S. president criticized Canadian policies related to a few industries including lumber, timber and energy, adding that officials will have to get to the negotiating table with Canada very quickly.

Trump also said this week he would make "some very big changes" to the NAFTA treaty with Canada and Mexico or "we are going to get rid of NAFTA for once and for all."

The threat to get rid of or alter NAFTA is a potential problem for Canada, whose biggest trade partner is the United States.

Gentiloni and Trudeau on the other hand were keen to display their support for free trade and open borders, including the Canada-EU free trade pact, amid growing populist opposition.

Gentiloni, who had been in Washington on Thursday, said Canada and Italy share a common, pro-trade world view and that they live in "interesting times." He also said the anti-trade movement is bigger than one single country.

"The United States president's opinions are perfectly legitimate," the Italian leader said through a translator. "But we have to be aware of the fact that this push that goes against free trade as a catalyst for world growth ... that is why we need to work politically, culturally and economically to fight against this trend."

Italy is to host the G7 leaders' summit next month, which will be part of Trump's entry into the world of multilateral summitry.