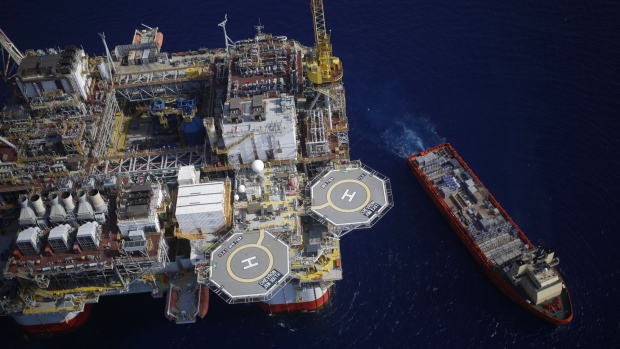 The Kobe Chouest platform supply vessel sits anchored next to the Chevron Corp. Jack/St. Malo deepwater oil platform in the Gulf of Mexico in the aerial photograph taken off the coast of Louisiana, U.S., , Bloomberg

The rebound in oil after a historic crash drove a surge in ETFs that track energy producers amid skeptical calls from analysts.

State Street’s US$2 billion SPDR S&P Oil & Gas Exploration & Production ETF, or XOP, has jumped about 40 per cent so far in April -- on track for its best month on record. Meanwhile, the US$8.8 billion Energy Select Sector SPDR Fund, or XLE, has climbed almost 20 per cent.

Oil rose after a collapse on Monday that saw prices in New York plunge below zero for the first time in history.

Building optimism over a sector bailout and production cuts beginning in May have buoyed the shares of energy producers, but those actions alone won’t change the outlook for many of those companies struggling with still low oil prices, according to Bloomberg Intelligence. 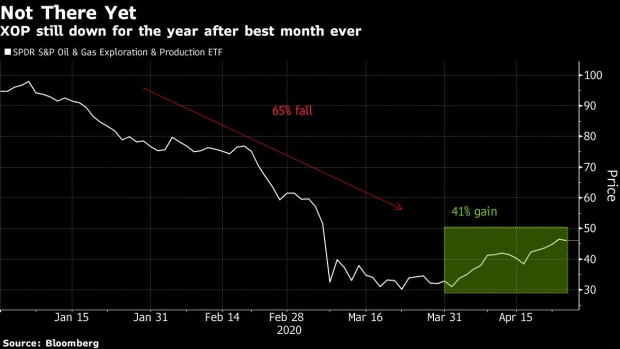 “The cuts are nowhere near sufficient and leverage is too high for some within the group,” said BI analyst Fernando Valle. “At the end of the day, most of these guys can’t survive at WTI below US$45 per barrel, so it’s still not a good setup.”

Treasury Secretary Steven Mnuchin said on Thursday he’s considering the creation of a government lending program for U.S. oil companies, helping to stabilize the market. Prices were hovering near US$17 per barrel in New York on Friday.

April’s gains in energy-production ETFs far exceed those of the US$254 billion SPDR S&P 500 ETF Trust, ticker SPY, which has risen about 8.5 per cent this month.

Even with April’s recovery, XOP has lost about 50 per cent and XLE has dropped over 40 per cent so far in 2020, while SPY is down roughly 13 per cent.

XOP’s rebound represents a normalization after investors dumped value stocks during the height of March’s sell-off, according to WallachBeth Capital.

“Remember, March saw forced liquidation after many came in long value stocks and were forced to cut risk at very bad, distressed levels,” said Ilya Feygin, a senior strategist at WallachBeth. “The relationship simply normalized after being stretched in March.”

Bart Melek of Toronto Dominion Bank doesn’t expect oil producers to outperform the commodity itself for much longer. While shares of oil companies have recovered alongside other value stocks, Melek sees the unprecedented supply- and-demand imbalance in oil markets starting to ebb.

“Value is very responsive to net earnings and cash flows, which tend to jump on any incremental increase above their break-even,” said Melek, head of commodity strategy. “As supply cuts take effect and demand starts to return, oil prices should move higher.”