'It's a bit scary': UBS strategist on speculative rally in GameStop

Despite a punishing two weeks and relentless chat-room taunting, GameStop Corp. haters are showing no signs of surrender.

GameStop stock equal to 139 per cent of its available shares has been borrowed and sold short, a bearish position showing mark-to-market losses of over US$6 billion year-to-date, according to data from financial analytics firm S3 Partners. That figure is little changed since last Thursday’s 141 per cent short-interest reading, even though GameStop shares have surged roughly 78 per cent in the past two days alone.

The still-high level of bearishness indicates that even though shorts are being squeezed out of their positions, new traders looking to bet against GameStop are rushing in, according to Ihor Dusaniwsky, S3’s managing director of predictive analytics. That’s occurring even as the cost-to-borrow shares for the purpose of selling them short spikes -- the stock borrow fee is currently 23.6 per cent, S3 data show.

“We are seeing a short-squeeze on older shorts who have incurred massive mark-to-market losses on their positions, but are seeing new shorts coming in and using any stock borrows that become available to initiate new short positions in hopes of an eventual pullback from this stratospheric stock price move,” Dusaniwsky wrote in an email. 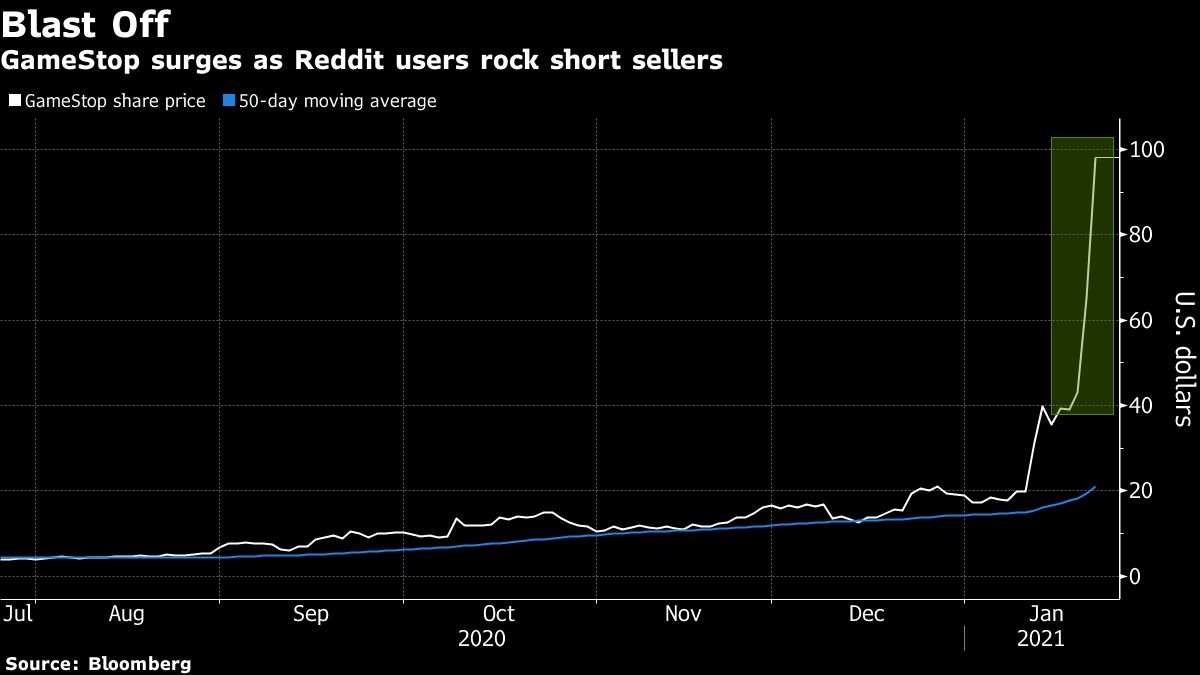 GameStop shares have surged 285 per cent since activist investor Ryan Cohen and two allies and fellow Chewy Inc. alumni gained seats on the video-game retailer’s board. The news was an inflection point and lit the fuse for retail investors betting the company could undergo a complete digital transformation.

The stock’s surge was in part fueled by an army of Reddit-charged day traders who used the website’s WallStreetBets forum to pump up shares and fight back against the eye-popping levels of short interest. Bets by Gabe Plotkin’s Melvin Capital and Andrew Left’s Citron Research have faced a reckoning in the battle with GameStop’s retail fans.

Left, who decided on Friday to no longer discuss the company, faced backlash from vocal Reddit users over his critiques of the company on Twitter and in a YouTube video. The noted short-seller referred to actions from “an angry mob” which responded to his argument for shares to “go back to US$20” when he said he’d go dark on the stock.

Still, even with Citron standing down, the mania has only gained momentum -- and spread to other stocks. GameStop closed up 18 per cent after soaring as much as 145 per cent on Monday and then briefly dipping to a loss. Express Inc., who some on Reddit have speculated will be the next GameStop, jumped 132 per cent. Meanwhile, BlackBerry Ltd. climbed 28 per cent after more than doubling in 2021.

Tell me what to buy tomorrow and if you convince me I’ll throw a few 100 k’s at it to start.

That’s piled on punishment for short-sellers, who were already smarting. A Goldman Sachs Group Inc. basket of the most heavily shorted stocks rose as much as 4.5 per cent in New York Monday. That brought its month-to-date return above 30 per cent, the most since at least 2008, as far back as data for the index goes.

“What that does is it makes it much harder to run a short book, because the companies with the weaker fundamentals are not realizing those fundamentals the way they used to,” Stuart Kaiser, head of derivatives research at UBS Group AG, said in a Bloomberg Television interview Monday. “If you’re short a stock right now, you’re really running serious risk to your portfolio to be in those stocks.”

In the eyes of S3 founder Bob Sloan thinks there’s more pain to come for the short-sellers still targeting GameStop.

“Get prepared for another round of short squeeze,” Sloane said in a Bloomberg Television interview Monday. “You are going to see GameStop go way higher.”

He added that the people who originally shorted the stock have been “taken out” only to be replaced by new investors who are going to short it again.

But action in the options market suggests the tide may eventually turn, according to Susquehanna International Group. The pace of bearish put-contract buying outpaced that of call purchases on Monday, with roughly 500,000 puts purchases versus 275,000 calls. That follows a similar dynamic on Friday, after six consecutive weeks of call volume clocking in higher than put buying.

“The GME rally is unlikely to last forever, and investors looking for a sign we are closer to the end could look at the 6 week streak of call volume outpacing put volume finally being broken,” wrote Susquehanna co-head of derivatives strategy Chris Murphy in a note Monday.