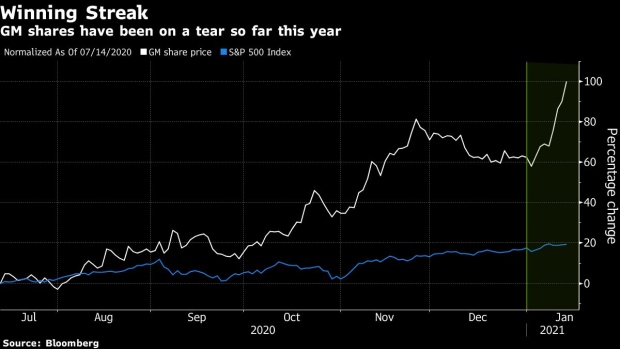 General Motors Co. Buick Velite 5 electric vehicles (EV), part of the fleet for SAIC General Motors Corp.'s internal vehicle sharing service, sits charging in Shanghai, China, on Thursday, July 18, 2019. The future for GM in China is in the hands of customers considering whether to go electric. No other country comes close to China, in terms of scale and adoption of new-energy vehicles, where more electric cars have been sold in Shanghai alone than in all of the U.S., U.K., or Germany. Photographer: Gilles Sabrie/Bloomberg , Bloomberg

The auto giant’s stock price touched an all-time intraday high at $51.57 on Thursday after closing at record highs on each of the past two trading days -- notching a 24% gain in the new year. In comparison, the shares rose only 14% in all of 2020, as car sales suffered globally after drivers stayed locked-down in their homes and drastically reduced travel and commutes to work.

As vehicle sales languished, GM missed out on the rally in electric-vehicle stocks that catapulted some upstarts into multibillion dollar companies. Chinese EV-maker Nio Inc., for example, often called the biggest rival of industry frontrunner Tesla Inc. in that country, now commands a market capitalization greater than GM.

Analysts now say that investors may have underestimated GM’s potential, including its joint ventures, battery technology and possible cost savings from a restructuring in North America.

“We believe that investors have undervalued the company’s strength in traditional internal combustion vehicles, as well as its Chinese joint venture, Ultium battery, and financial services businesses,” Argus Research analyst William Selesky said while upgrading GM to buy from hold on Thursday.

That came close on the heels of an upgrade by Nomura analyst Anindya Das on Wednesday, who also recommended buying the stock. Das said that while electrifying vehicles is costly, GM’s strategies can help it to absorb the hit relatively better than its U.S. peers. The analyst said that GM’s restructuring of its North American operations is saving money and improving profitability, while the company’s plan to form an alliance with Honda can cut procurement and research and development costs.

Earlier this week, GM said it would develop commercial electric vehicles, showed two futuristic Cadillac EV concepts and provided a peek into multiple other cars at its presentation at the CES, formerly called the Consumer Electronics Show.