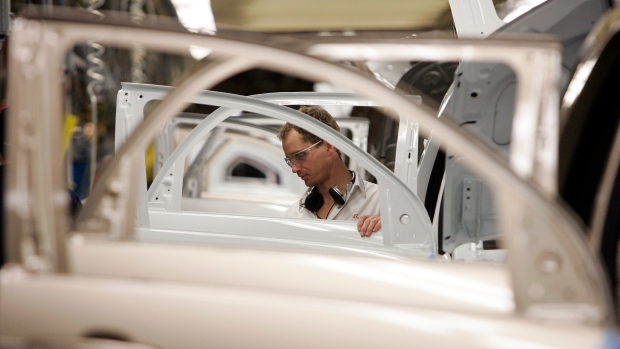 Production at the CAMI Automotive facility in Ingersoll, Ontario. , The Canadian Press/Dave Chidley

General Motors Co. will invest nearly US$800 million to bring production of the BrightDrop EV600 electric vehicle to its CAMI manufacturing plant in Ontario.

The investment will convert the factory into a large-scale electric delivery vehicle manufacturing plant to support GM’s timing to deliver the EV600 in late 2021, the company said in a statement. The agreement is subject to ratification with union Unifor and confirmation of government support.

Separately, Ford Motor Co. reached a tentative contract agreement with Unifor in the latter half of last year, including plans to assemble five battery-powered models beginning in 2025 at the company’s Oakville, Ontario plant. The plant was at risk of closing because the Edge sport-utility vehicle made there has an uncertain future.

Fiat Chrysler Automobiles NV also agreed to spend between CUS$1.35 billion and CUS$1.5 billion on a new electric-vehicle platform at its Windsor, Ontario plant.

GM has deep roots in Ontario, having built over 20 million vehicles at its Oshawa plant since 1918. GM said last fall it will invest as much as $1.3 billion to reopen its assembly plant in Oshawa under a tentative deal with Unifor.