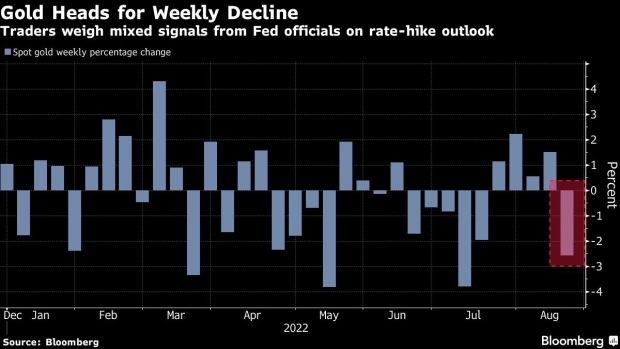 Two hundred and fifty gram gold bars arranged at Gold Investments Ltd. bullion dealers in London, U.K., on Thursday, March 17, 2022. Gold rose for a second day as investors weigh the trajectory of the Federal Reserve’s rates tightening cycle against risks to growth from the war in Ukraine. , Bloomberg

Policy makers offered divergent views on the size of the next interest-rate increase, but they agreed on the need to keep raising interest rates. St. Louis’s James Bullard urged another 75 basis-point move while Kansas City’s Esther George struck a more cautious tone. Richmond’s Thomas Barkin echoed that resolve on Friday, noting the risk those efforts could cause a recession.

Bullion dropped to a three-week low as the dollar and Treasury yields strengthened, bringing the precious metal’s weekly loss to 3.1%.

The resurgence in the dollar has weighed heavily on the precious metal, which was already seeing profit taking after recently reaching $1,800 an ounce, according to Craig Erlam, a senior market analyst at Oanda Corp. “It may just be more difficult if the dollar continues to drive higher and yields don’t ease further,” Erlam said in a note.

Read more: Barkin Says Fed Will Curb Inflation Even at Risk of Recession