Gold is set to snap its longest rally since January, hurt by gains in the dollar and Treasury yields after a higher-than-expected reading on U.S. inflation.

U.S. consumer prices climbed in April by the most since 2009, according to Labor Department data Wednesday. Rising yields reduce the appeal of non-interest-bearing bullion, and a stronger dollar makes bullion more expensive for investors holding other currencies.

Markets were already concerned that rising inflation amid surging commodity prices could prompt the Federal Reserve to boost rates earlier than expected. Gold had shrugged off that concern, rising to the highest in three months earlier this week after a report Friday showed a surprise slowdown in U.S. job growth, supporting the case for continued economic stimulus.

“Gold is approximately 50 per cent correlated with Treasuries, so it gets hit as interest rates rises,” said Jay Hatfield, president of Infrastructure Capital Management. “On top of that, the dollar is rallying. The stock market dipping on the inflation data showed that investors fear that the Fed may need to tighten soon.” 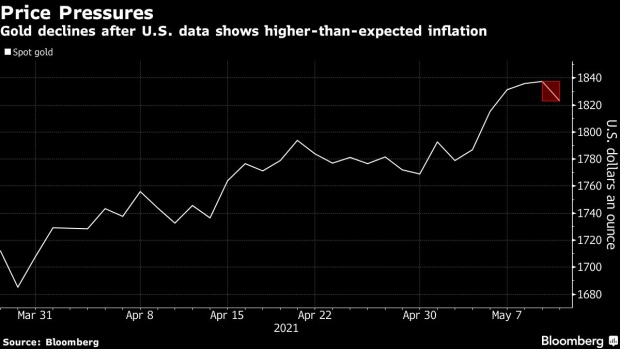 Policy makers at the central bank have been unified in supporting the case for low interest rates.

Futures for June delivery on the Comex declined 0.7 per cent to settle at US$1,822.80 an ounce. Spot silver, platinum and palladium slid.