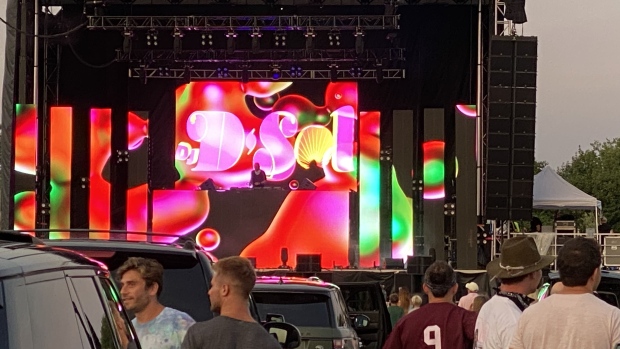 People were ready to party in the Hamptons, and Goldman Sachs Chief Executive David Solomon, fresh off a great quarter and a multibillion-dollar fine to settle criminal charges in Malaysia, was one of them.

So were parking, security, tech and sound crews, many of whom hadn’t worked for months.

They came together on a field Saturday night for an epic event in any Hamptons season, more so in the time of COVID-19: the first Safe & Sound drive-in concert. A couple of thousand people — including the Winklevoss twins — were in attendance, dancing on the grass and the tops of their cars to the Chainsmokers.

Solomon was on stage for an hour, just him and a turntable on an elevated platform, mask around neck, surrounded by animations of cherries and his deejay name, D-Sol, in flashing bubble letters. He put his hand up in the air, playing electronic dance beat takes on popular songs — not unlike the Chainsmokers, with more Fleetwood Mac than Coldplay. Giant plumes of smoke went up in front of the stage as the sky turned pink and orange.

Meanwhile, about 350 people hired for the event at Nova’s Ark Project in Water Mill were dealing with conditions on the ground. About 500 cars were parked in spots that cost as much as US$25,000, with the top tier including an air-conditioned RV and private bathroom. Crews also cleaned the portable toilets every 10 minutes.

Valets dressed in white polos and khakis found ways to be helpful, like stopping the Surf Lodge vehicle from backing into some beach chairs as its driver tried to maneuver into a spot (the white lines delineating them had been sprayed on Friday). Others in golf carts dropped off bags of ice so guests could keep their drinks cold. (A crew of two ran from vehicle to cooler, row by row, under a blazing sun with cans of Red Bull and BrightFox.)

Charlie McArdle, owner of PeoplePool Valet Service, said the concert was the first big event of the season.

“The event business is done,” said McArdle, who usually staffs about 300 of them a year. He offers US$20 an hour to a pool of about 200 college students who count on the income to help pay for school. He had 40 people working Saturday.

Of course, events can only work during a pandemic if people act and feel safe. The organizers, In the Know Experiences, seemed vigilant, with temperature checks and frequent announcements about wearing masks when moving around the venue. Still, there were clusters of friends dancing and mingling close together with masks off.

Seth Kaplan, co-founder of In the Know Experiences, said it was a trial run for concerts his firm will produce in Miami and other locales. Any profits from the Hamptons event will be donated to No Kid Hungry, Southampton Fresh Air Home and Children’s Medical Fund of New York.

“I felt safe,” said Serena Kerrigan, who started a dating show on Instagram Live during the lockdown that has many of her followers asking her for romantic advice. The concert, whose sponsors included the dating app Bumble, was “definitely not a place to meet someone,” she said.

“You were supposed to stay in your zone, not venture off,” she said. “The point was to listen, not flirt.”

Still, after so many months of not hearing live music, the experience was a pleasant distraction, Kerrigan said, and in some ways an improvement over other concerts she’s attended.

“Why didn’t we do this before?” she asked. “Usually we’re sweaty and uncomfortable crammed together and you have to buy expensive drinks."