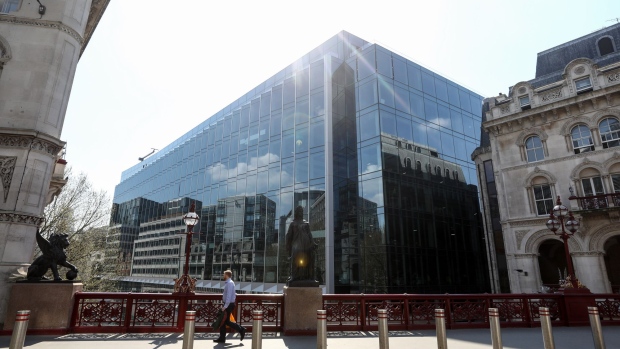 A pedestrian crosses a bridge in view of the new European headquarters of Goldman Sachs Group Inc. in London, U.K., on Friday, April 20, 2018. Foreign investors are less worried about the impact of Britain's exit from the European Union than they were a year ago, Association of Foreign Investors in Real Estate Chairman Edward M. Casal said in a statement, referring to London's jump from third to first place in an annual survey of real estate investors. Photographer: Simon Dawson/Bloomberg , Bloomberg

The Wall Street bank is encouraging its London employees to go back to working from home if possible, though its office will remain open for those who need to come in, according to a person familiar with the matter. The reversal comes just as the bank was preparing to welcome a bigger share of its staffers back into London and New York offices after months of lockdowns left its central hubs largely empty.

There’s a real risk of “many more deaths” if people fail to do their part, the U.K. premier warned in a televised address on Tuesday evening. Johnson’s top scientific adviser has warned that the country needs urgent action to slow the spread of the virus.