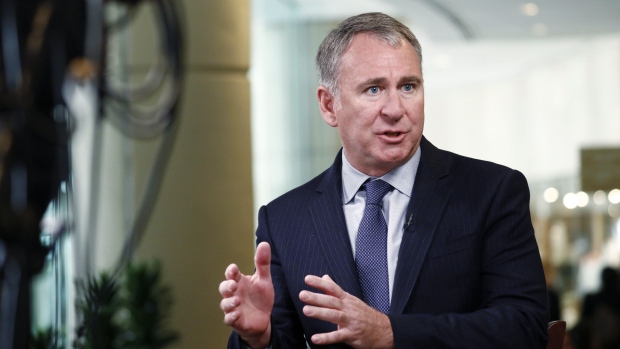 Kenneth Griffin, founder and chief executive officer of Citadel LLC, speaks during a Bloomberg Television interview at the Milken Institute Global Conference in Beverly Hills, California, U.S., on Tuesday, April 30, 2019. The conference brings together leaders in business, government, technology, philanthropy, academia, and the media to discuss actionable and collaborative solutions to some of the most important questions of our time. , Bloomberg

(Bloomberg) -- Ken Griffin, the Citadel chief who helped provide a cash infusion to struggling Melvin Capital Management in January 2021, said he didn’t speak to founder Gabe Plotkin before he announced it was shutting down.

Plotkin, whose hedge fund fell 55% during the meme-stock frenzy early last year, said Wednesday that he was unwinding his fund after racking up additional losses and frustrated backers with a short-lived plan to reimpose fees.

“I did not speak to Gabe in the last couple of weeks,” Griffin said in an interview Thursday at Bloomberg Intelligence’s Market Structure conference.

When asked if closing shop was the right move, Griffin answered, “This is Gabe’s business. It’s Gabe’s personal decision. I’m not going to second-guess his choice in life.”

Plotkin is an “iconic investor” who did an “incredible job for his clients” over the years, but he went through “a really tough run,” Griffin said. “He chose a decision that worked for him.”

Melvin had reported a streak of stellar annual gains before 2021. Despite recovering after the losses in January of that year, the fund ended 2021 down 39%, and had fallen 23% this year through April.

Griffin’s Citadel funds, as well as partners of his Chicago-based firm, provided a $2 billion infusion to Melvin amid the Reddit-fueled mayhem.