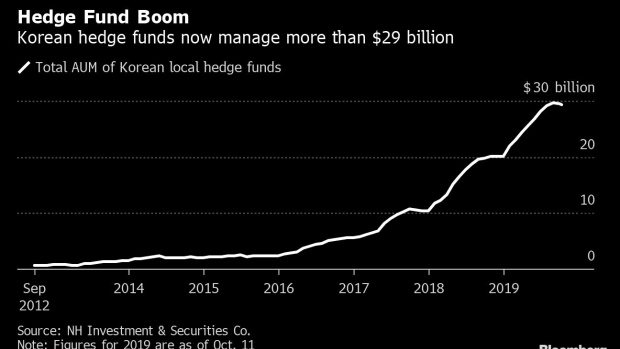 In an echo of the liquidity crunch that caused the stunning downfall of British investor Neil Woodford, Seoul-based Lime Asset Management Co. last week began freezing withdrawals from $710 million of funds that owned convertible bonds of small Korean companies. Clients asked to pull their cash amid reports of alleged wrongdoing at Lime, but the firm said it couldn’t sell its holdings fast enough to meet the redemption requests.

The worry now is that Lime’s crisis will spook investors in other hedge funds, triggering a flood of outflows that ripples through Korean markets.

The country’s financial regulator has said it will take steps to prevent market contagion, but signs of an exodus are already cropping up. Investors pulled about 400 billion won ($337 million) from hedge funds in September, the first net outflow this year, according to NH Investment & Securities Co. It’s unclear how much of that came from Lime.

Some hedge fund managers “are increasingly concerned they could face similar calls for redemptions,” said Jeon Kyung-Dae, chief investment officer for equities at Macquarie Investment Management Korea. “People have started to look at all kinds of private funds with suspicion.”

The turmoil at Lime, which oversees about $4 billion, is the latest in a series of fund crises that have put a spotlight on the dangers of investing in illiquid assets.

Woodford said this week that he would close his investment firm after bets on small-cap stocks and unlisted companies left him unable to pay back investors who wanted out. Swiss money manager GAM Holding AG last year froze funds tied to Tim Haywood after the former star bond investor was suspended and it was unable to meet ensuing redemption requests.

A common denominator at all three firms was the mismatch between the liquidity of their funds and that of the securities they owned.

Lime’s problems began in July, when Korean media started reporting that prosecutors and regulators had launched investigations into the firm related to several aspects of its trading and investing practices. Lime refuted the allegations in a statement posted July 24. On Monday, it confirmed the existence of an investigation but declined to comment further.

Some Lime funds that invested in convertible bonds allowed clients (mostly wealthy individuals) to withdraw money once a month. But as the redemption requests piled up, the firm was unable to liquidate its bond holdings at prices it considered reasonable. Converting the securities into more widely traded shares was also seen as an unattractive option because equity values on Korea’s small-cap Kosdaq market have dropped about 30% from a high in January 2018.

“The biggest problem for Lime was it invested in illiquid assets in an open-type fund that allowed investors to withdraw when they want,” said Kim Pil-kyu, a senior research fellow at Korea Capital Market Institute. “Lime itself is in a serious crisis,” he said. “It is a question of whether it can continue its asset management business or not.”

While the situation at Lime has echoes in other countries, it also has uniquely Korean characteristics. Sales of convertible bonds, which pay low coupons but let investors swap into shares, have surged in the country thanks in part to support from the government. Policy makers have promoted the market as an important source of funding for startups, which often struggle to issue traditional debt.

The hybrid securities, worth an estimated $11 billion in April, were mainly bought by homegrown hedge funds, which have proliferated in recent years after the government relaxed regulations. The industry now manages more than $29 billion, up from close to zero in 2012.

Financial Services Commission Chairman Eun Sung-soo told reporters on Oct. 10 that regulators will continue to monitor the situation at Lime and “will handle the issue to ensure that it doesn’t become a factor to disturb the market.”

For Macquarie’s Jeon, the crux of the problem is that the convertible bond market has expanded too quickly and lacks appropriate oversight.

“The market has grown so fast, and we didn’t have detailed regulations on it, and brokers sold this hard-to-understand product recklessly,” Jeon said, adding that convertible bonds have attractive features and are performing well for some hedge funds. The Lime case could be an opportunity to improve the market, he said.

Others are less optimistic.

“Because of the situation at Lime, the entire convertible bond market could be frozen,” said Han Byung-hwa, an analyst at Eugene Investment & Securities Co.

--With assistance from Whanwoong Choi.

To contact the editors responsible for this story: Lianting Tu at ltu4@bloomberg.net, Tom Redmond, Michael Patterson