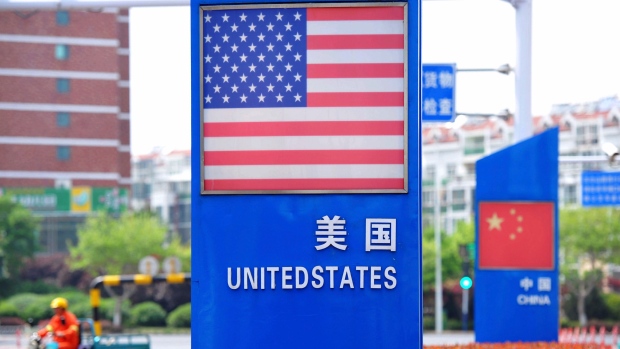 A worker drives an electric cart past a display featuring the U.S. and Chinese flags in a special trade zone in Qingdao in eastern China's Shandong province, May 8, 2019. Chinatopix via AP

What else would unify Indonesian bonds, semiconductor ETFs and Italian debt but this U.S-China showdown on tariffs.

Wall Street is issuing words of caution on the expansive collateral damage, forcing investors of all stripes to stress-test what-if scenarios, from bets on U.S. Treasuries to the very fringes of risk.

“This changes the thought process,” Daniel Gerard, head of investment and risk advisory for Asia Pacific in Singapore at State Street Bank & Trust Co., said in an interview with Bloomberg TV. “If this continues this changes our decision from being pro-late cycle -- a growth story -- into a more defensive case.”

For bulls who have ridden the speculator rally in risk, here’s a gut check across assets.

Global equities have pole-vaulted over the wall of worry on trade this year -- so naturally this week’s brinkmanship threatens to spur a material pullback.

The question is: How bad can things get?

Bank of America Corp. estimates the S&P 500 could tumble 5% if the brinkmanship intensifies, paying the way for extended volatility. The indirect damage -- delayed investment -- would be greater than the near-term impact on earnings, it reckons.

A further escalation of tariffs with no deal in the near term would spur as much as a 10% pullback in the S&P, according to the U.S. bank.

Putative outperformers: High-quality, domestic-focused and defensives like utilities and consumer staples, according to Barclays Plc.

But it could get worse: Talks totally crater, China retaliates, and more tariffs kick in. U.S. stocks could fall more than 10 per cent in that scenario from current levels, according to UBS Global Wealth Management Chief Investment Officer Mark Haefele.

Europe’s equity market, with its even-higher external exposure, has it worse on paper -- though at least expectations and valuations are lower. As such, Bank of America reckons the Euro Stoxx 50 could drop over 3 per cent from current levels. A no-deal scenario could push the index down by as much as 11 per cent, the bank said.

German shares, in particular, have an outsize exposure to cyclical sectors like semiconductors, mining and tech hardware, UBS Group AG strategists led by Nick Nelson wrote in a note.

According to Morgan Stanley, the Hang Seng Index could drop around 3 per cent to 27,700, while the Shanghai Shenzhen CSI 300 Index falls to 3,440, or almost 8 per cent.

The US$72 billion Invesco QQQ exchange-traded fund, which tracks the Nasdaq 100, is one ETF to watch given its sizable exposure to the tech and consumer discretionary sectors. The First Trust Consumer Discretionary AlphaDEX fund, or FXD, has the heaviest exposure to sensitive industries such as auto components.

Semiconductor funds top the list of ETFs with outsize holdings of large-cap companies generating more than 10 per cent of their sales from China, according to Bank of America. BlackRock Inc.’s US$1.2 billion SOXX fund is most vulnerable by this measure, according to the bank.

Cash flows linked to growth are in the firing line, and that’s especially a concern for Asian corporate bonds after rallying hard in the first quarter. Those gains have left the asset class looking stretched given the headwinds blowing through commerce, according to Barclays strategists led by Avanti Save.

Asia credit has tended to take its cues from global equities. When the S&P 500 lost more than 3 per cent within a five-day period, corporate bond yields in the region increased by at least six to seven basis points with a slight lag, according to Save’s team. Spreads widened further during extended sell-offs in U.S. equities, typically around 12 to 15 basis points when equities fell by 4 per cent or more, Barclays notes.

Vanguard Asset Management expects riskier debt -- such as that of Ukraine, Argentina and Indonesia -- to be hardest hit by the turbulence.

In Europe, while bunds rally, Italian securities are at risk of a pronounced sell-off. Yields for the latter surged this week by the most since February. UBS Group AG recommends that investors underweight two-year bonds from the nation in the event U.S.-China tensions increase.

In the meantime, U.S. President Donald Trump is keeping markets on edge with frenetic tweets that veer in tone from exultant about his Chinese counterparts to excoriating.

“Just when we thought we were comfortable, we had a pretty decent earnings season, we had historically low FX volatility, markets were doing pretty well, and then we just get a tweet that shakes thing up,” said State Street’s Gerard.