A small mutual-fund provider has made history by becoming the first to formally change its products into exchange-traded funds.

Guinness Atkinson Funds announced on Monday that it had converted two of its mutual funds into the SmartETFs Dividend Builder (ticker DIVS) and SmartETFs Asia Pacific Dividend Builder (ADIV). The conversion was a non-taxable event for shareholders, and the funds will retain their performance history.

It’s a big moment for the US$5.9 trillion U.S. ETF industry, which has long been considered the scrappy upstart to the more established, mature market for mutual funds.

Generally lower costs, easier access and tax advantages mean ETFs have been luring assets away from mutual funds for years, and this week’s conversions could be the start of a wave. Quant giant Dimensional Fund Advisors is already next in line, with a far more substantial switch set to take place next month.

“It could shakeup the landscape a little,” said Sal Bruno, chief investment officer of IndexIQ. “The first one is going to be the most difficult, but once that road gets paved a little bit, I think we’ll see some more come in.” 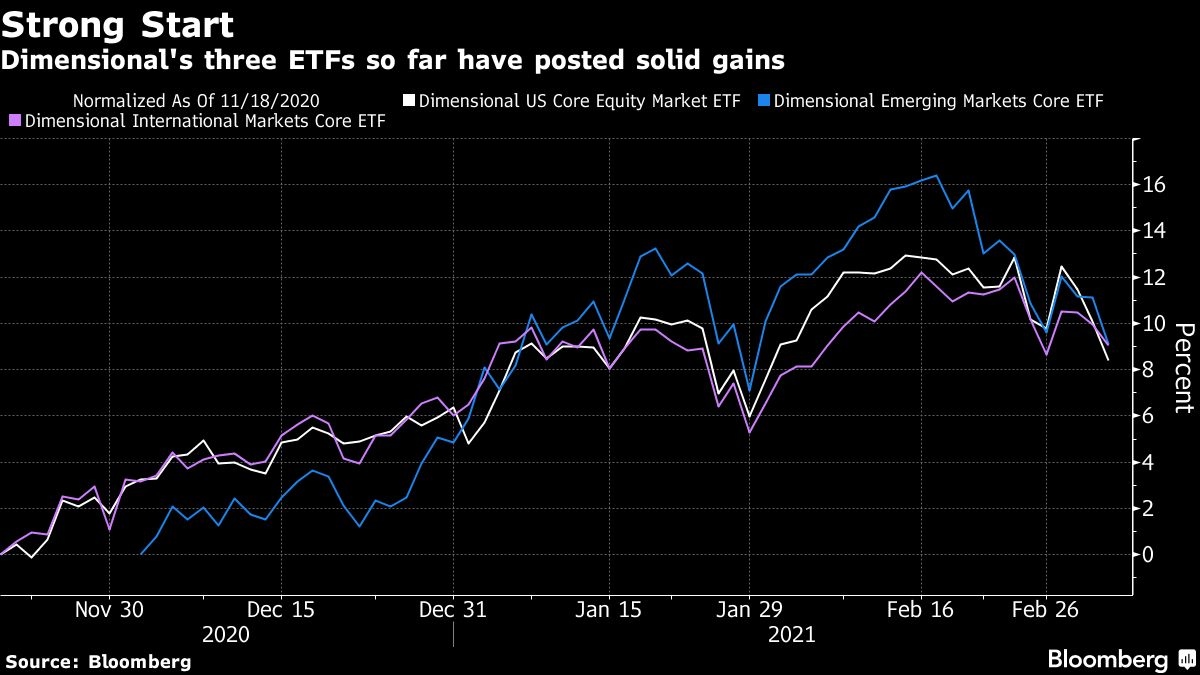 The U.S. ETF industry took in almost US$500 billion last year, while mutual funds lost about US$362 billion, according to data compiled by Bloomberg. That’s helped push total ETF assets up from about US$4 trillion at this time in 2020.

Bloomberg Intelligence estimates active managers could bring US$100 billion to the ETF industry through the mutual-fund conversions as well as other internal asset moves.

Los Angeles-based Guinness Atkinson is already planning to convert its Alternative Energy Fund into the SmartETFs Sustainable Energy ETF. But the small size of its funds -- DIVS has US$23 million and ADIV has US$4.4 million -- mean all Wall Street eyes are now set to turn to Dimensional.

The Austin, Texas-based manager of US$601 billion will start converting around US$26 billion worth of mutual funds into ETFs beginning in early June. That will catapult the firm to become one of the 12 largest ETF issuers in the U.S., according to Bloomberg Intelligence. It only entered the market last year.

While the Guinness Atkinson conversion is formally the first, the shift of assets between the fund classes has long been an industry feature. Most notably, Vanguard Group has been converting some mutual-fund holdings to lower-cost ETFs, although these are structured as a share class within the mutual-fund business.

Meanwhile, not every mutual fund can easily transform into an ETF. Many have broad multiple share classes and are distributed across a variety of platforms, according to Ben Johnson, director of global ETF research at Morningstar Inc.

“For example, it would be difficult and generally unadvisable to convert a mutual fund that is predominantly owned in employer-sponsored retirement programs into an ETF,” he said. “Most of these programs don’t have the plumbing to accommodate ETFs and the benefits of the ETF wrapper don’t have the same appeal in a tax-deferred setting that’s designed for long-term savings.”

The new Guinness Atkinson ETFs got off to a slow start, with no trades as of 10:57 a.m. in New York.

All the same, the conversions mark a new phase in the tug-of-war between the structures. Even as the firm was finalizing the switches, yet another manager -- Adaptive Investments -- was filing to change some of its mutual funds into ETFs.

Also in the queue is a small cannabis fund, which perfectly encapsulates why issuers are looking to make the jump.

Foothill Capital Management’s Cannabis Growth Fund (CANNX) has returned more than 140 per cent in the past 12 months, but despite its success has less than US$7 million in assets.

In contrast, pot ETFs have been enjoying record popularity. The ETFMG Alternative Harvest ETF (MJ), which has returned 94 per cent in the past year, has US$1.8 billion in assets.

“Managers are getting more adept at identifying the benefit that the ETF could present,” said Ryan Sullivan, senior vice president of Brown Brothers Harriman’s global ETF services. “That should give them a tailwind to get their boards comfortable with it.