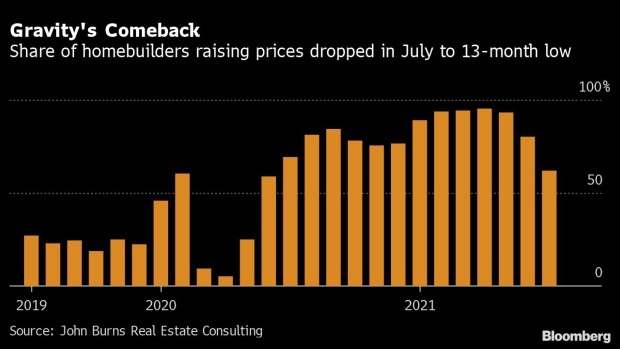 (Bloomberg) -- Homebuilders in the U.S. may have pushed buyers to a breaking point by raising prices higher and faster than ever. Now, they’re easing up -- but just a little.

About 62% of homebuilders said they raised prices in July, the smallest share since June 2020 and down from the peak of 95% in April, according to a survey by John Burns Real Estate Consulting. Prices increased 19% from a year earlier, matching June’s rate after the pace accelerated every month since October.

Faced with unprecedented demand, homebuilders have been limiting sales to catch up with a mountain of back orders. Now that lumber costs are coming down and buyers are beginning to hesitate, companies are scaling back price increases.

“We’re hearing more that buyers are saying. ‘This is too much, I’m going to pass,’” said Rick Palacios Jr., research director at John Burns. “No builder will tell you they can raise prices 20% year after year without seeing any pullback in demand, and we’re starting to see that stuff show up right now.”

The typical rate of homebuilder price increases before the pandemic was 4% to 5%, the firm’s data show.