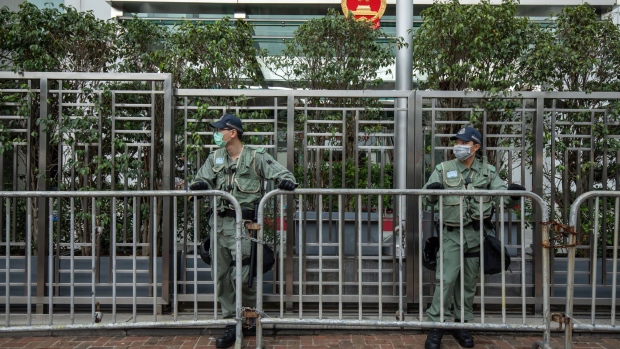 Police officers wearing protective masks stand guard as the national emblem for China is displayed at the Liaison Office of the Central People's Government in Hong Kong, China, on Friday, May 22, 2020. Bloomberg/Paul Yeung

Hong Kong protesters battled with riot police in busy downtown areas on Sunday, showing their opposition toward China’s dramatic move to crack down on dissent in the biggest demonstration since the coronavirus swept through the city in January.

Police deployed a water cannon and fired tear gas in the Causeway Bay shopping area after hundreds of protesters gathered to oppose new national security legislation from China. Police warned the crowd they were taking part in an illegal gathering, and later said in a statement that “rioters threw umbrellas, water bottles and other objects at them.” At least 180 people were arrested, mostly for illegal assembly, while at least four members of the police media liaison team were injured, according to a post on the police Facebook page.

“We must stand up and fight, and let Beijing know that we will never surrender,” said Joshua Wong, one of the city’s most prominent activists, adding that the national security law was even more damaging than an extradition bill that spawned six months of often violent protests.

“We would describe it as the beginning of the end,” he said. “We don’t have enough time but we still need to continue the fight.”

More protests are planned for later in the week, when Hong Kong lawmakers are set to consider legislation that would punish anyone who disrespects China’s national anthem. In Beijing, the annual session of China’s legislature is expected to ram through a law to prevent and punish any acts of secession, subversion or terrorism in the city that threaten national security.

The Hong Kong government said the protests demonstrate the need for the new security measure. The violence shows “that advocates of ‘Hong Kong independence’ and rioters remain rampant, reinforcing the need and urgency of the legislation on national security,” according to a statement.

The biggest erosion of Hong Kong autonomy since China took control of the former British colony in 1997 has alarmed democracy advocates and foreign businesses who fear the city will lose its independence from the mainland. The Hang Seng Index of stocks plunged 5.6% on Friday, its biggest loss since July 2015.

The developments have also opened another front in U.S.-China tensions. Secretary of State Michael Pompeo said the U.S. is weighing how to respond to China’s national security laws, which he called a “death knell” for Hong Kong autonomy. Options include sanctioning Chinese officials, tariffs on Hong Kong goods and banning sensitive technology sales to the city.

Chinese Foreign Minister Wang Yi, who spoke in Beijing on Sunday during the National People’s Congress while protesters were defying police in Hong Kong, said the matter was an internal affair. He said it was necessary to stop separatists, independence advocates and external forces backing “violent and terrorist activities.”

The new legislation will prevent and punish any acts of subversion or terrorism in the city that threaten national security. More @business: https://t.co/lNQVk7Djrm pic.twitter.com/5mAwtgWvGZ

City officials including Financial Secretary Paul Chan on Sunday echoed those comments, trying to allay fears the moves will threaten confidence in the financial sector. Local business groups including the American Chamber of Commerce have voiced concern about the “vaguely defined” law.

“An NPC announcement that it will bypass the Hong Kong legislative process to enact a Hong Kong security law may jeopardize future prospects for international business, particularly if a long list of details are not spelled out and clarified,” AmCham said on Friday.

Hong Kong was wracked by demonstrations in the second half of last year, sparked by the government’s proposal to introduce a law allowing extradition to jurisdictions including China. The coronavirus outbreak largely put an end to big protests as people stayed indoors and the government limited public gatherings.

"We must stand up and fight, and let Beijing know that we will never surrender."

The police used tear gas on Sunday for the first time in about two months, since clashes in the suburban area of Yuen Long in late March. Officers on Sunday urged members of the public to leave the scene and proceed to safe locations.

For all of Beijing’s attempts to reassure the world that Hong Kong will stay autonomous, those protesting on Sunday like Terence Tong weren’t convinced.

The unrest could turn “more violent,” he said, paying little heed to the police as he joined the demonstrations on the street. “As I am a Hongkonger, I must take every step I can.”

--With assistance from Jing Li and Gregor Stuart Hunter