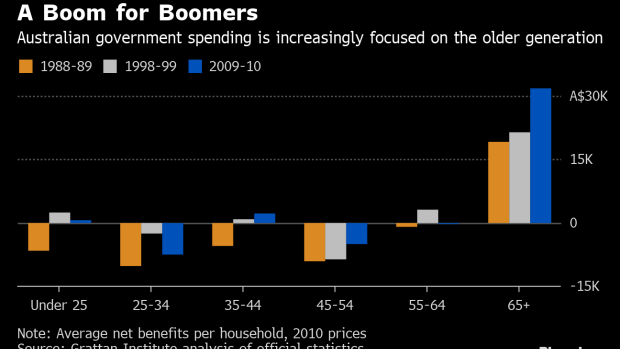 Residential buildings stand in the Green Square area of Sydney, Australia, on Saturday, Jan. 12, 2019. Prices in Australia's biggest city have tumbled 10 percent and some economists are tipping a similar fall this year. While the central bank isn't panicking just yet, a 15 percent nationwide drop in prices would cut about A$1 trillion ($720 billion) from the housing stock value. Photographer: Brendon Thorne/Bloomberg , Bloomberg

(Bloomberg) -- A generation of young Australians priced out of the property market and frustrated at a widening wealth divide could prove pivotal in triggering a change of government in May.

The main opposition Labor party has made tackling the growing gap between so-called baby boomers and millennials a key plank of its campaign to win office for the first time since 2013.

The center-left party, which is leading Prime Minister Scott Morrison’s government in opinion polls, is pledging to curb tax breaks for property investors that helped drive home prices beyond the reach of many Australians. Labor leader Bill Shorten is also promising to scrap tax refunds worth A$5 billion ($3.6 billion) a year for share investors -- a policy that’s angered wealthier retirees but is more popular with under-35’s.

“Younger voters are missing out on political and economic benefits that previous generations have enjoyed and Shorten has been smart enough to make that an election issue,” said Jill Sheppard, a political analyst at the Australian National University. Labor is “targeting its message at younger generations that fair reforms are needed.”

While Australia has avoided recession for 27 years, the spoils have not been shared evenly as older people capture a greater share of the nation’s wealth. According to the Grattan Institute, households headed by people aged 65-74 were on average A$566,000 wealthier in 2015-16 than the same age group was 12 years earlier. That far outstrips growth in other bands and compares with just A$38,000 for the 25-34 age group.

Such a concentration of wealth among older Australians can hurt the real economy, according to Danielle Wood, an economist at the Melbourne-based think tank. Younger Australians priced out of the property market, for instance, are forced to live further from cities -- lengthening their commutes and reducing the likelihood of second income-earners working full time.

“Housing affordability has clearly been the No. 1 economic issue for younger Australians in the past decade,” Wood said.

While prices have retreated 12 percent from a mid-2017 peak, Sydney’s median house price is still more than A$900,000 and the city is the world’s third least-affordable housing market. Only 45 percent of people aged 25-34 own their own home, down 16 percentage points from the 1980s.

As well as pledging to subsidize rents and build 250,000 new homes, Labor plans to scale back a perk called negative gearing, which allows investors to claim the costs of owning a rental property as a tax deduction against other income. The curb is backed by 51 percent of voters, with support rising to 59 percent among those aged 18-34, according to a Newspoll published Feb. 11.

The same poll put Labor ahead of Morrison’s Liberal-National coalition, on 53 percent to 47 percent, though an Ipsos poll this week put the lead at just 51-49 percent.

Shorten also plans to scrap tax refunds paid out to shareholders under a system known as dividend imputation. Labor says ending the refunds, introduced by a Liberal-National government in 2001, will save the budget A$56 billion over the next decade and relieve the burden on younger taxpayers.

Morrison says curbing negative gearing will cause the housing market to tumble even further and jeopardize the economy. His government also opposes ending the refunds, saying the policy would strip a key source of income for many retirees, who have staged protests against the plan.

Labor, which unlike the government has a portfolio for young people, is also pledging more concerted action to curb carbon emissions and support renewable energy. Morrison has faced nationwide protests from school children over his inaction on climate change.

Shorten has long sensed an opportunity in capturing the youth vote. In 2015, he called for the voting age to be lowered to 16, saying there was a “democracy deficit” for young people disengaged with conservative government. A growing number of young Australians are politically engaged, with more than 70 percent of 18-year-olds voting in the 2016 election, up from about 50 percent in 2013.

Labor is tapping into a growing sentiment among younger Australians that inter-generational inequality must be tackled. In 2010, 42 percent of voters aged 18-25 supported a redistribution of income and wealth, according to a study commissioned by the Australian National University. By 2016, that had grown to 63 percent.

Wood of the Grattan Institute said she was watching for signs that the “stark polarization” of voting behavior seen in the U.K.’s last election -- with young people increasingly supporting Labour and older people backing the Conservatives -- would be repeated in Australia. Key factors that drove voting patterns in Britain -- housing affordability, educational costs and stagnant wages for young people -- were also apparent in Australia.

“I do expect that we might see a little bit more of this generational polarization than we have in the past,” she said.

To contact the editors responsible for this story: Ruth Pollard at rpollard2@bloomberg.net, Edward Johnson, Chris Bourke