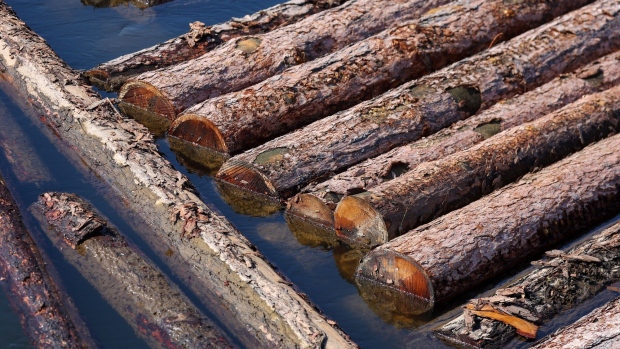 Logs float on the Yenisei River as part of a large timber raft close to the Lesosibirsk Woodworking Plant, operated by Segezha Group, in Lesosibirsk, Russia, on Wednesday, July 14, 2021. Lumber futures have been plunging lately, having completely erased the meteoric gains seen in 2021. Photographer: Andrey Rudakov/Bloomberg , Bloomberg

The rise in energy prices after Russia’s invasion of Ukraine have forced the government to partly scrap one of Prime Minister Viktor Orban’s signature policies, the generous subsidies on household consumption. Hungary risks having shortages despite Orban’s maintaining the closest links to Russian President Vladimir Putin among European Union members.

An emergency government decree published late Thursday eases the way for the clearcutting of native tree species - which include oak and beech - in protected forests, while also relaxing other restrictions on loggers. The government has also instructed schools to check if they can switch to wood from gas for their heating.

The retail price of firewood climbed 18% in June compared to a year ago, according to the Hungarian statistics office. It’s expected to rise further into the fall as households look for alternatives to expensive gas heating. The government banned exports of firewood last week to help maintain supply.

The latest relaxation of environmental rules will make Hungary more vulnerable to the effects of climate change without giving even a short-term boost to energy security, the World Wildlife Fund said in a statement.