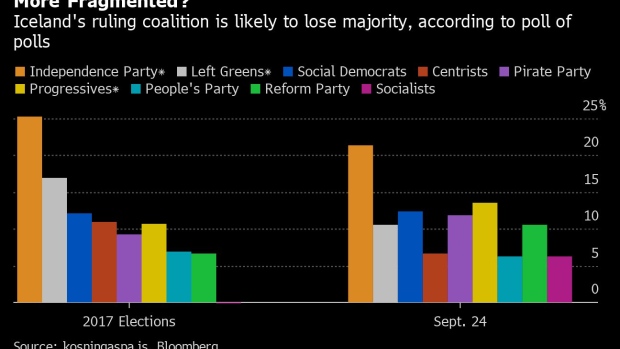 (Bloomberg) -- Iceland holds an election with the pandemic largely behind it but its voters faced with a reality check.

The travel restrictions with Covid-19 have laid bare just how much the sparsely-populated island got hooked on tourism, while there is little consensus on whether climate change presents a challenge or an opportunity.

This country in the North Atlantic ocean is vulnerable to boom-and-bust cycles. The 2008 financial crisis just about bankrupted it when its outsized banking sector collapsed. Tourism took over as the growth engine. Yet now, the country known as the land of fire and ice because of its unspoilt natural beauty has the same problem of how to diversify a fragile economy.

Iceland is the only Nordic country that hasn’t bounced back to pre-crisis levels of activity after its economy plunged 6.6% in 2020. Fishing, the historic driver of growth, supplanted tourism last year as the top contributor to gross domestic product for the first time in five years.

The conservative Independence Party, traditionally dominant, is poised to win with a clear margin, and is led by Finance Minister and former premier Bjarni Benediktsson. It wants Iceland to become the first fossil fuel-free nation but is still less ambitious in its climate goals than most of the other parties.

Prime Minister Katrin Jakobsdottir’s administration also includes her eco-socialist Left Green Movement and the agrarian Progressive Party. Such a political composition reflects a fragmented parliament that will likely remain a fixture no matter who wins, and result in drawn-out coalition talks.

Similar to neighboring Norway, which held elections this month too, concerns over global warming were a campaign theme, with the anti-establishment Pirate Party seeking carbon neutrality for Iceland five years ahead of the current 2035 schedule. There are also worries that more welfare spending could threaten government finances.

“One fears that there will be considerable easing of public finances, so much that it will create more problems than the ones it is meant to solve,” said Konrad Gudjonsson, chief economist at Iceland’s Chamber of Commerce.

Independence Party’s voters overwhelmingly support continued cooperation with Jakobsdottir’s Left Greens, even as they differ on almost every issue except for opposing membership in the European Union.

Possible scenarios include the current coalition joined by a liberal or centrist party, or a more conservative government. Fisheries remain a point of contention for Icelanders, with some parties keen to hike fees for fishing quotas. The Independence Party, a backer of the industry, wants to preserve the system which it says is sustainable.