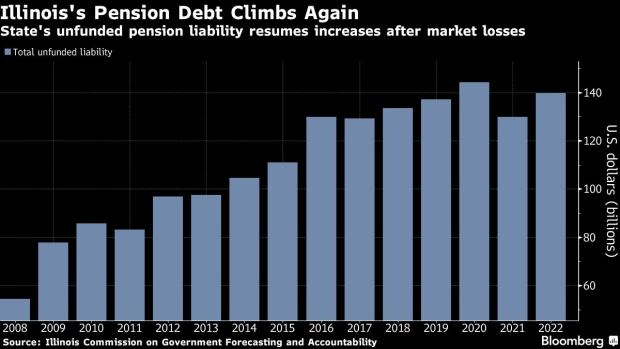 (Bloomberg) -- Illinois’s debt to its employee retirement funds rose as the pensions were hammered by investment losses, erasing some of the bull-market gains that briefly chipped away at the state’s obligations.

The unfunded pension liability across Illinois’s five retirement systems rose 7.5% to $139.7 billion in the fiscal year that ended in June, based on the market value of their assets, according to a report from the Illinois Commission on Government Forecasting and Accountability on Thursday.

The increase is a shift from 2021, when the state’s debt to the pensions dropped as stock prices were rallying toward record highs. That had pushed what Illinois owed the funds down to $129.9 billion in fiscal 2021 from a peak of $144.2 billion in 2020.

Illinois’s massive debt to the retirement funds was built up by years of failing to set aside enough to cover all the benefits that have been promised. It has been a major financial drag, leaving Illinois with a lower bond rating than any other US state and forcing it to pump more tax money into the system to catch up.

Illinois’s funded ratio declined to 43.8% in 2022 — meaning it has less than half of what it needs to cover all the benefits it will pay out in the coming decades. That’s significantly less than most pensions, with the aggregate funded ratio of US state and local plans about 74.7% in 2021, according to the Center for Retirement Research at Boston College.

Illinois is boosting contributions to the retirement systems in an effort to get them 90% funded by 2045.

Illinois Governor J.B. Pritzker has worked to improve the state’s finances with steps such as pre-paying pensions and building up reserves, Jordan Abudayyeh, a spokesperson for the governor, said in an email on Thursday. State pension contributions are no longer projected to grow faster than current revenue sources, she said.

“Today, Illinois is better prepared for these market fluctuations, and is still well below the height of the unfunded pension liability,” she said. “We will continue the proven methods that responsibly reduce the long-term obligation while ensuring that retirees receive the benefits they were promised.”

(Updates with comment from governor’s spokesperson in last two paragraphs.)