Inflation takes a bite out of growth, the economy, and companies: Colin Cieszynski

Canada’s stock market rallied 22 per cent in 2021, but investors are betting on more gains as they shift from volatile growth stocks.

The S&P/TSX Composite Index is trading near its cheapest level on record relative to the S&P 500 Index after getting caught up in the global stock rout. That’s emerging as a catalyst for gains, especially since looming interest-rate hikes and surging commodity prices benefit the value-heavy national equity benchmark.

Canadian stocks are below their five-year average valuation at about 14.4 times, and creeping toward levels as low as Japan’s Tokyo Stock Exchange Tokyo Price Index -- known for its low multiples. After years of soaring technology stocks, the growth-heavy S&P 500 Index, by contrast, is trading at 20.1 times forward earnings.

“Canadian equities remain a strong relative value play within global markets, with 2022 likely positioned to see expanded reopening of the economy that should result in another year of record earnings and one of the strongest dividend growth cycles in decades,” Bank of Montreal Chief Investment Strategist Brian Belski said in a note. He expects the S&P/TSX to climb to 24,000 by the end of the year, which would mark another all-time high. 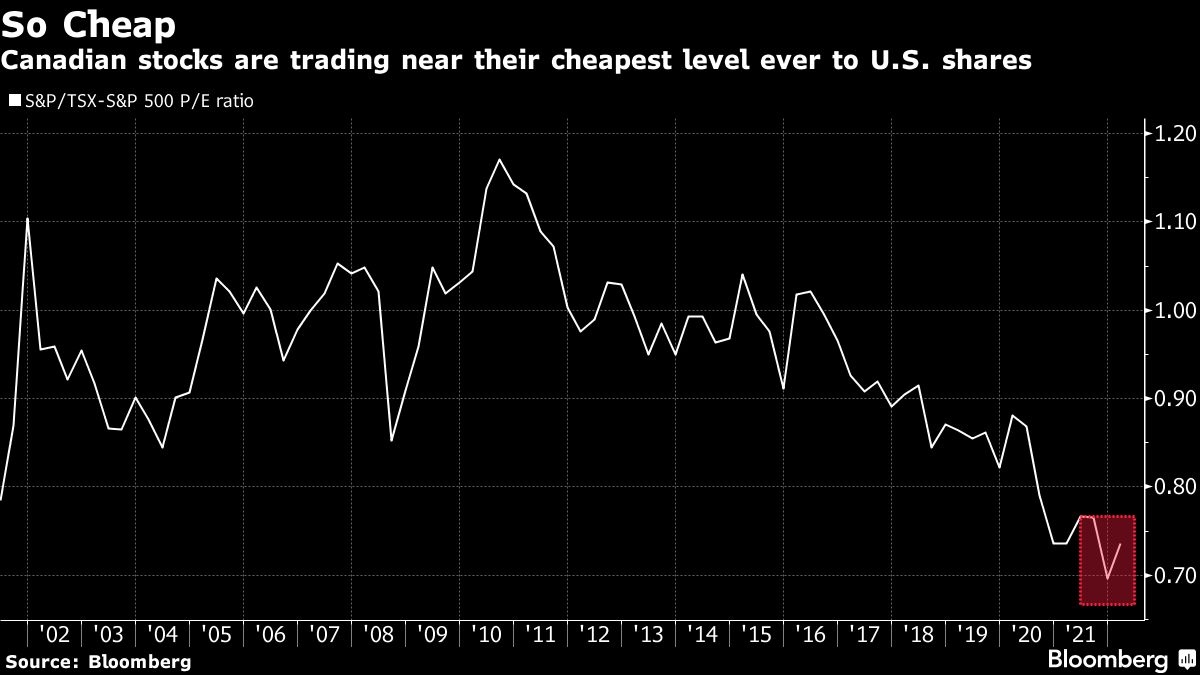 Global benchmarks have tumbled in the first month of the year, but the TSX has staved off major losses. Propping up Canada’s market are value stocks, with financials and energy making up half of the index.

Canadian National Railway Co. launched earnings season with an expectation-beating fourth quarter even after one of North America’s largest railroads contended with floods, frost and grain shortages -- a sign that Canada’s economy strengthened in the wake of strict COVID-19 restrictions.

The result could be a harbinger for what’s to come. Scotiabank market strategist Hugo Ste-Marie expects fourth quarter earnings per share from companies in the TSX to hit a new high as a bulk of the companies benefit from an improving economy.

“A healthy labor market, soaring commodity prices and resilient profit margins could argue for a beat,” Ste-Marie said in a note to clients, adding that pent-up demand trumps supply challenges and inflationary pressures.

The Bank of Canada and the U.S. Federal Reserve signaled on Wednesday that they could tighten monetary policy as early as March. The Big Six banks, which make up nearly a quarter of the TSX, would benefit the most.

“We’re looking at stronger than expected earnings in the financials and energy sectors that benefit in this environment,” Fiera Capital vice president and portfolio manager Candice Bangsund said in an interview. “I would expect positive surprises on those fronts given the sharp revival in economic growth and the rally in the commodities space.”