When faced with a spike in Treasury yields and a tech sector pullback that erased US$1 trillion from stock prices, exchange-traded fund investors decided to pour more money into equities.

Despite the recent turmoil in the bond market, the S&P 500 Index extended a rally from its March 2020 lows to more than 70 per cent and ETFs tracking stocks notched their best month of inflows on record, according to data compiled by Bloomberg. Traders added almost US$86 billion to those funds in February.

The striking figure underscores investors’ unflinching bullishness amid prospects for additional fiscal stimulus and the COVID-19 vaccine rollout, alongside continued support from the Federal Reserve. At least for now, that’s overshadowing any concerns about the recent surge in Treasury yields and the pressure that puts on already elevated equity valuations, especially in the tech industry. 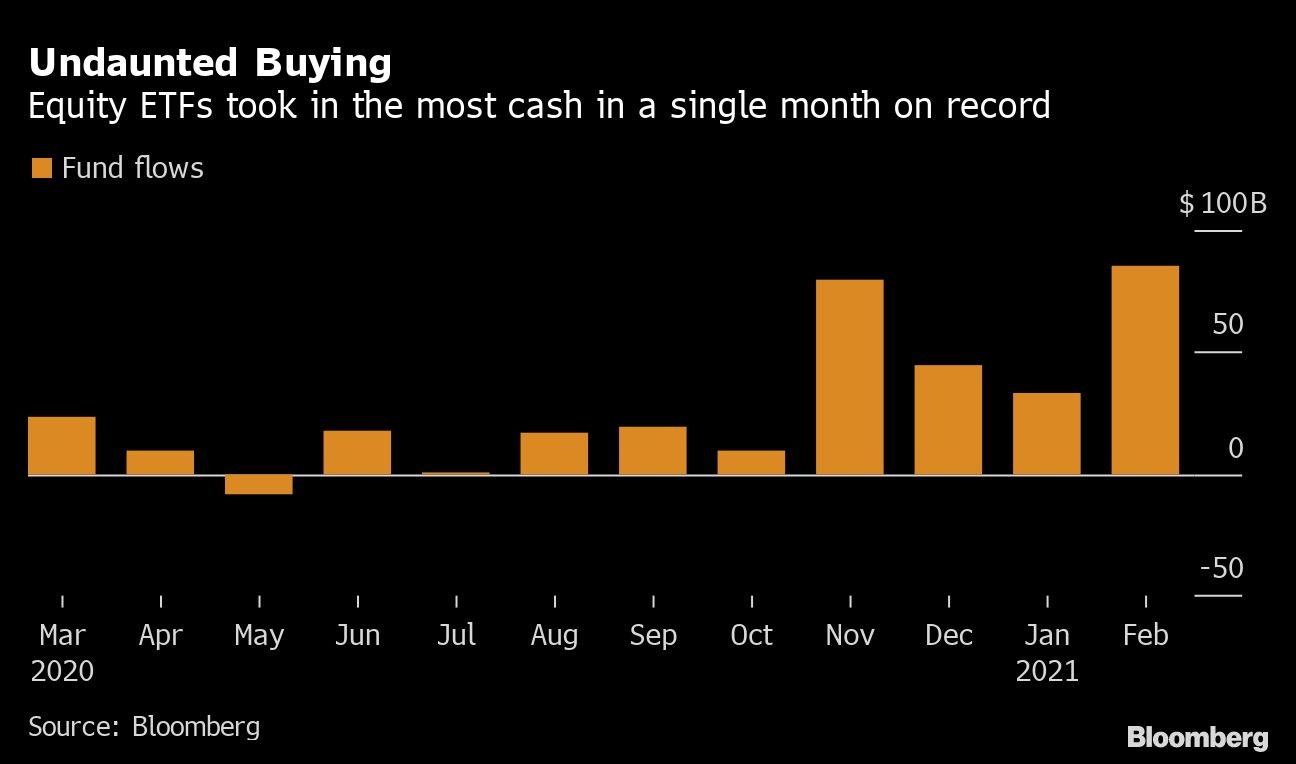 “Investor psychology has shown a bias toward optimism,” said Keith Buchanan, portfolio manager for GLOBALT Investments in Atlanta. “The animal spirits, if you will, are and have been at play in the past 11 months in this rally. There’s a lot of liquidity still out there, and it has found a home.”

The February intake beats even November’s haul after vaccine breakthroughs ignited a massive cash infusion into equities, with about 95 per cent of stock funds posting gains. Vanguard Group’s S&P 500 ETF (VOO) led the way in February, luring over US$11 billion -- the most on record -- although much came through a single-day US$8.7 billion inflow early in the month.

“Despite the volatility, where else can investors park money?” said Mohit Bajaj, director of ETFs for WallachBeth Capital. “Bond yields have rallied so much, investors would shy away from fixed income because of the price depreciation. Equities ETFs would be the only possible substitute.”

Meanwhile, flows to fixed-income funds paled in comparison to their equity peers, taking in only US$10.4 billion -- the lowest since March. The $46 billion iShares iBoxx $ Investment Grade Corporate Bond ETF (LQD) had its worth month of outflows ever, losing US$3.5 billion as short interest spiked.

Another fund that was recently under pressure was Cathie Wood’s popular ARK Innovation ETF (ARKK), whose biggest holding is electric-car maker Tesla Inc. The product, which surged almost 150 per cent last year, had its worst week of outflows ever. Still, it took in a net US$2.4 billion in February.

“They have a really fervent investor base and people who believe in these companies and this big future growth style,” said Ross Mayfield, investment strategy analyst at Baird. “A week of underperformance is not going to break the back of these investors. It would take a lot more than that to discourage flows from going in.”