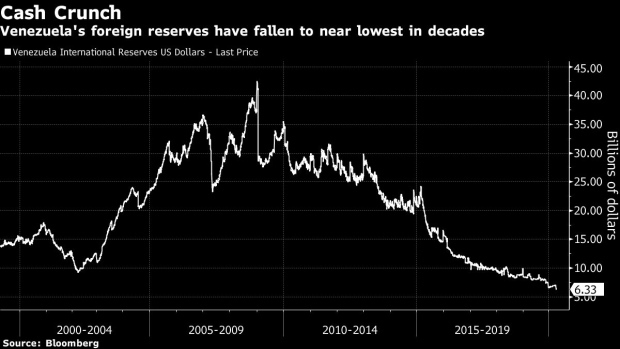 (Bloomberg) -- Out of cash and desperate for help in propping up its oil industry, Venezuela is raiding its gold vaults and handing tons of bars to its long-time ally Iran, according to people with direct knowledge of the matter.

Government officials piled some 9 tons of gold -- an amount equal to about $500 million -- on Tehran-bound jets this month as payment for Iran’s assistance in reviving Venezuela’s crippled gasoline refineries, the people said. The shipments, which resulted in a sudden drop in Venezuela’s published foreign reserve figures, leave the crisis-ravaged country with just $6.3 billion in hard-currency assets, the lowest amount in three decades.

The two nations -- both pariahs of sorts in international circles -- are working more closely together as they try to withstand withering U.S. sanctions and a coronavirus-sparked collapse in the price of oil, their main source of revenue. For Iran, the deals provide a fresh source of revenue. For Venezuela, they ensure that its supply of gasoline doesn’t totally run out.

Iran is the latest destination for Venezuelan gold after the U.S. cracked down on similar deals that the Nicolas Maduro regime was conducting with Russia, Turkey and the United Arab Emirates.

The sanctioned Tehran-based carrier Mahan Air has flown more than half a dozen jets to the South American nation in the past week alone. Most delivered gasoline additives, parts and technicians to help repair Amuay refinery in Falcon state on the Northwestern coast. Meanwhile, Mahan has sent other planes to the international airport outside of Caracas, where they are loaded with the gold bars to take back to Tehran, said the people, who asked not to be named because they aren’t authorized to speak publicly about the transactions.

A Venezuelan central bank press official didn’t respond to requests for comment, nor did officials at Venezuela’s Information Ministry or Iran’s Ministry of Foreign Affairs.

As oil prices collapse, the gold held in Caracas is a now an even more important source of wealth for Venezuela, which has been driven into extreme poverty under Maduro’s socialist rule. While the country holds some 70 tons of gold in its vaults, selling it has become increasingly difficult.

When Maduro’s predecessor, the late Hugo Chavez, was in power, he and Iran’s then-leader Mahmoud Ahmadinejad cut deals on a variety of energy, agricultural and financial projects. They even opened a joint car assembly plant west of Caracas.

After a brief -- and rare respite -- Venezuela’s currency is once again in free fall and inflation has started picking back up, with the annual rate climbing to about 3,500%, according to a Bloomberg index. A strict quarantine to fight the coronavirus pandemic is beginning to show cracks and the risk of greater social unrest is growing as Venezuela frantically tries to secure food and fuel.

With much of the central bank staff self-isolated at home, the transport of the gold bars into armored cars to be taken to the airport was discrete and conducted by employees and heavily armed security officials from the vaults located in downtown Caracas, according to the people familiar with the matter.

The gold and remaining central bank assets are part of a larger battle for control of Venezuela’s finances between Maduro and Juan Guaido, the National Assembly leader who is trying to install a transitional government with the support of the U.S. as well as Latin American and European nations.