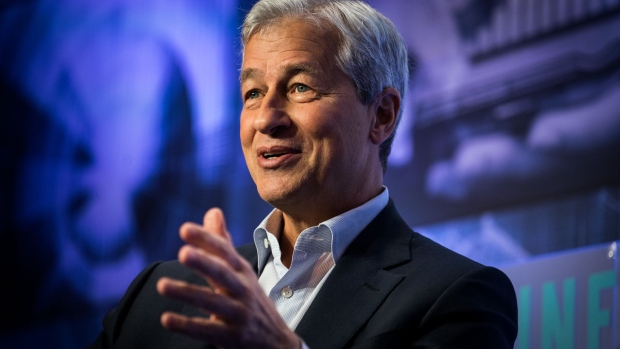 Bernie Sanders may have performed well in this week’s Iowa caucuses, but it’s still unlikely he’ll be the next U.S. president -- at least according to Jamie Dimon.

“I don’t think it’s going to happen,” the JPMorgan Chase & Co. chief executive officer said Wednesday of the Vermont senator, who’s seeking the Democratic nomination. “And he has very strong support, but he’s not anyone’s second or third choice.”

The two have been taking jabs at each other, with Sanders, a self-proclaimed socialist, going after Dimon in a campaign ad last month. He labeled the CEO “the biggest corporate socialist in America today” because his bank received federal aid after the last financial crisis. The ad came after Dimon knocked socialism in a Time magazine op-ed.

“America would survive a President Sanders,” Dimon said at a Society of the Four Arts talk in Palm Beach, Florida. “Democracy is messy. It’s better than all other choices.”

Sanders was trailing Pete Buttigieg by a narrow margin in the Iowa caucuses Wednesday as the state’s Democratic Party continued to struggle with releasing long-delayed results. The former South Bend, Indiana, mayor had 26.9 per cent of state delegate equivalents, compared with Sanders’s 25.2 per cent, with three-quarters of almost 1,700 precincts reporting results.

Dimon said another Democratic candidate, Michael Bloomberg, “would be a great president.” Bloomberg, the founder and majority owner of Bloomberg LP, the parent company of Bloomberg News, didn’t participate in the Iowa caucuses. “He’s trying a completely untested strategy.”