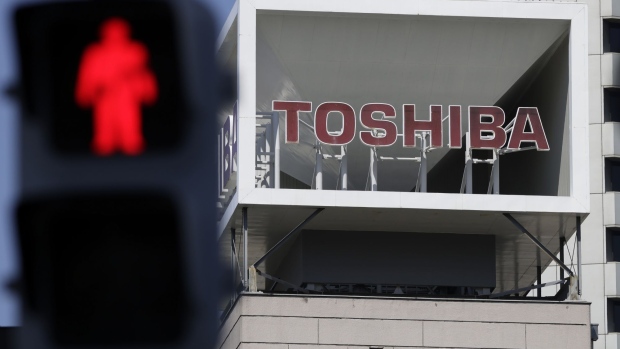 Signage for Toshiba Corp. displayed at the company's headquarters while the red figure is illuminated on a pedestrian light in Tokyo, Japan, on Wednesday, April 7, 2021. Toshiba surged its daily limit of 18% after confirming it received an initial buyout offer from CVC Capital Partners, setting the stage for potentially the largest private equity-led acquisition in years. Photographer: Kiyoshi Ota/Bloomberg , Bloomberg

(Bloomberg) -- KKR & Co. is backing away from a potential $22 billion bidding war for Toshiba Corp., the Financial Times reported, citing people familiar with the discussions.

The private equity giant has lost enthusiasm for a takeover of the Japanese industrial icon, opting instead to acquire businesses that will get spun off during a privatization process, the newspaper said.

KKR’s retreat could pave the way for rivals like Bain Capital to acquire the company, which is trying to leave behind years of scandal and mismanagement. Toshiba has said it’s received eight bids to privatize the company and two offers to form business alliances. KKR and Blackstone Inc. had held exploratory discussions about teaming up on a joint bid for the Japanese conglomerate, Bloomberg News reported in May.