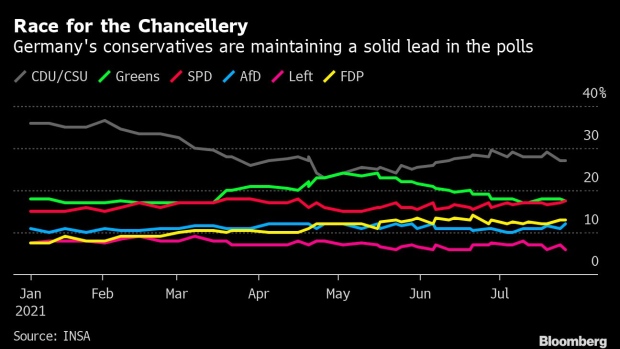 (Bloomberg) -- Annalena Baerbock, the Greens’ candidate to be chancellor of Germany, is attracting the attention of the Kremlin with her hawkish attitude to Russia and her slip-ups on the campaign trail have left her vulnerable.

Russia has identified 40-year-old Baerbock as a threat to its interests after she briefly topped the polls ahead of September’s election, according to three people familiar with the authorities’ thinking. Her opposition to completing the Nord Stream 2 gas pipeline between Germany and Russia is a particular concern. One person close to the Russian government said it would be prepared to go to great lengths to block her path to office.

The Greens have already alerted the German security services to an increase in cyber attacks that deploy recognized Russian tactics, though they have no proof that the Kremlin is involved. Party officials have been hit by spear-phishing emails that typically seek to install spying software on their networks while Baerbock herself has been targeted by false news stories and smears on social media, according to two people with knowledge of the situation.

Germany is a key European partner for Russia, which sees Berlin as a counterweight to the dominant U.S. influence in the continent and Chancellor Angela Merkel, a Russian speaker, has been a crucial part of that equation. She defended the Nord Stream 2 project despite opposition from successive U.S. administrations and tensions with Moscow over the poisoning of opposition leader Alexey Navalny and a Russian hit job in a Berlin park.

Read More: Merkel Shying Away From Action That Would Really Hurt Putin

But Baerbock strikes an uncompromising line.

“We don’t need this pipeline, for reasons tied to climate policy and certainly with respect to European policy,” she said at a media forum sponsored by Frankfurter Rundschau newspaper on Wednesday. “You have to have a clear position -- to say that we’re not going to complete this pipeline.”

The Kremlin fears that a Baerbock victory would be a major setback for Russia’s global interests, ruining its ties with Germany and handing the U.S. a big win, said two people familiar with the Russian leadership’s thinking. Kremlin spokesman Dmitry Peskov didn’t respond to a request for comment. Russia has routinely denied interfering in other countries’ elections.

With western governments on the lookout for signs of Russian foul play, the U.S. intelligence services last month dispatched their top expert on election meddling, Shelby Pierson of the Office of the Director of National Intelligence, to Berlin, according to an official familiar with the visit.

She explained to her German counterparts that voting sabotage has gone beyond vulnerabilities in the election infrastructure to include far more sophisticated disinformation campaigns and cyber warfare, the official said. A press officer at the ODNI declined to comment.

“There’s stuff that is quick and dirty that they don’t mind pushing out on RT or on other social media accounts that are clearly connected to them,” said Mark Galeotti, an expert on the Russian intelligence services at the Royal United Services Institute in London, referring to the Kremlin-funded TV network. “But then they’ve now realized that if it’s to have real credence then instead what they need to do is to cultivate people who are legitimate journalists, influencers and people who are connected into the wider debate.”

In that respect, Baerbock has been playing into the hands of would-be saboteurs after facing accusations that she embellished her resume and plagiarized passages of a book laying out her political vision. Such missteps create fertile ground for Russian agents to amplify negative commentary of the Greens or spread disinformation, two officials in Berlin said.

Support for Baerbock has dropped by about 10 points over the past three months, leaving her looking now more like a potential coalition partner for Merkel’s Christian Democrats, rather than an alternative as chancellor.

The Kremlin toolbox deployed in support of President Donald Trump’s 2016 election victory includes disinformation campaigns on social media and so-called hack-and-leak operations, using software to seize sensitive information that can be distributed at an opportune moment, the people said. Russian officials are confident there is enough information available to damage Baerbock, another person close to the Kremlin said, criticizing her as politically naive and too sympathetic to the U.S.

The Greens cite “worrying indications” of cyberattacks and party officials have observed increased activity from websites tied to the Kremlin directed at individual Green politicians, according to party spokesman Jan Hoelting.

Lawmakers and staffers in the German Bundestag have observed a wave of phishing raids, according to a person close to the party. In one instance, targets received emails with the name of a close acquaintance and a greeting in the subject line. Such messages often contain malware or software that could spy on party systems.

German counterintelligence identifies this technique as another common Russian ploy. The hackers first target lower-level party members who are more vulnerable and can help them gain access to higher ranking officials.

German counterintelligence has explicitly warned of the threat of cyber activity originating in Russia ahead of the Sept. 26 election, including from groups such as APT 28, known as Fancy Bear, with ties to military intelligence. German state and political structures face a “fundamentally increased risk potential” from Moscow, the Federal Office for the Protection of the Constitution said in its annual report.

Disinformation campaigns have also been deployed against Baerbock. One story that circulated on Facebook Inc. claimed to quote Baerbock as saying that the “widow’s pension” should be abolished in order to fund support for refugees. Correctiv, an investigative website, said in May that the post was shared 2,800 times within a day, though no one has publicly suggested the Russians were responsible. The Greens have no such policy.

Similar messages with falsified quotes and images of Baerbock have steadily increased since her nomination, on social platforms including Facebook, Twitter, WhatsApp and Telegram, the Greens’ Hoelting said.

Baerbock and the Greens are on the receiving end of far more attacks on social media than Merkel’s Christian Democrats or the Social Democrats, according to research published in Der Spiegel on Saturday. From a sampling of social media posts categorized as hate speech, Spiegel counted more than 63,000 directed at Baerbock, three times more than CDU candidate and frontrunner Armin Laschet. SPD candidate Olaf Scholz had only 4,000.