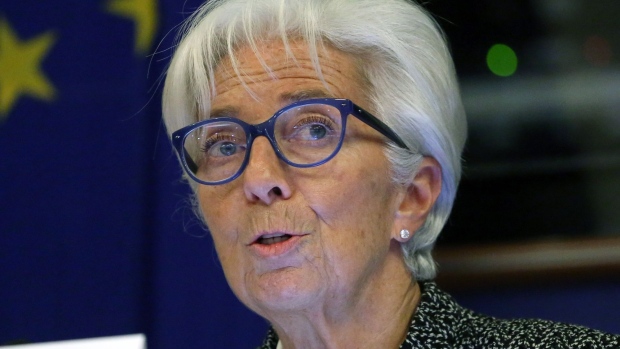 Christine Lagarde, president of the European Central Bank (ECB), speaks at the Frankfurt European Banking Congress in Frankfurt, Germany, on Friday, Nov. 18, 2022. Lagarde said interest rates may need to be lifted to levels that restrict economic expansion in order to drive down inflation that’s rocketed to more than five times the official target. , Bloomberg

“I would like to see inflation having peaked in October, but I’m afraid that I would not go as far as that,” she told European lawmakers Monday in Brussels. “There is too much uncertainty, particularly in one component, that is the pass-through in high energy costs at wholesale level into retail level, to assume that inflation has actually reached its peak. It would surprise me.”

While the overall pace of consumer-price increases is likely to have slowed for the first time in 1 1/2 years in November, it still stayed above 10%, almost all economists predict. The median of 41 estimates in a Bloomberg survey is for an outcome of 10.4% in the report due Wednesday.

Investors are looking for any sign that the ECB’s appetite for jumbo interest-rate hikes may be waning after the most aggressive increases in borrowing costs in its history, and as the 19-nation euro zone braces for a recession.

Some members of the 25-strong Governing Council have already called for a slower pace -- particularly as plans to start unwinding the roughly €5 trillion ($5.2 trillion) of bonds bought in recent crises come together.

Others, though, see little room to let up, with inflation running at more than five times the 2% target. Dutch central bank chief Klaas Knot said earlier Monday that Europe should be ready for a “protracted period” in which the ECB returns inflation to the goal. Bundesbank President Joachim Nagel said the ECB mustn’t ease off “too soon.”

“How much further we need to go, and how fast we need to get there, will be based on our updated outlook, the persistence of the shocks, the reaction of wages and inflation expectations, and on our assessment of the transmission of our policy stance,” Lagarde said.

That may entail taking borrowing costs to levels that restrict economic growth, she said, as price pressures persist.

“Whenever I ask my top-notch economists at the ECB and I ask about the risks, the answer that I get for the moment is, that risk is to the upside,” Lagarde said.

--With assistance from Bryce Baschuk and Bastian Benrath.